A number of Olympians – including the most decorated Olympic athlete of all time, Michael Phelps – have been photographed with large red circles on their skin!

What are they, and why is everyone suddenly going dotty over them? The mark of an Olympic athlete, at least at Rio 2016, seems to be a scattering of perfectly round bruises. Swimmers and gymnasts, particularly from Team USA, are among those seen sporting the mysterious dots.

It’s not the first time cupping marks have been seen at the Olympics – the technique was previously used by Chinese swimmer Wang Qun at the 2008 Olympics in Beijing.

Perhaps Americans wondered and searched for the different reasons behind the peaking Chinese athletes since the last few Olympic Games. Now they started to practice the technique.

They red circular marks not paintballing misadventures – they are the result of a practice known as “cupping”; an ancient therapy where heated cups are placed on the skin.

The technique, which is a form of acupuncture, is done by lighting flammable liquid in a glass cup. Once the flame goes out, the drop in temperature creates suction which sticks the cups to the body.

The suction pulls the skin away from the body and promotes blood flow – and leaves those red spots, which typically last for three or four days.

Difference between Cupping and Wet Hijama 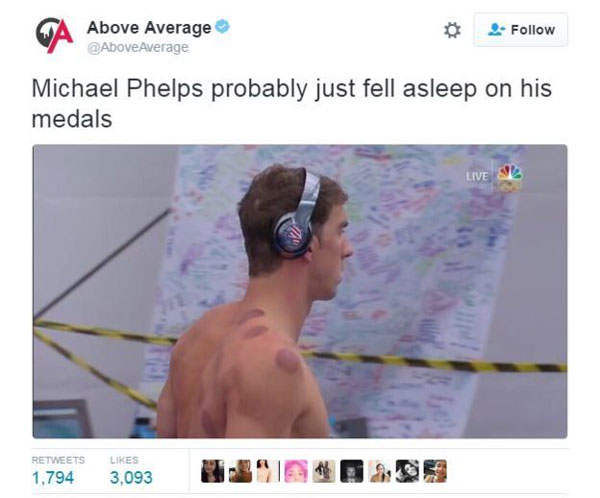 Before glass cups, cups made of bamboo were used to the same effect. The technique is known in Mandarin Chinese as “huo guan”, which means “fire cupping”, and is popular in China with older generations, he says.

However, the alternative technique of it which is practically known as “wet cupping”, is done in both China and some parts of the Muslim World where it is known as Hijama.

It involves making a small cut in the skin before the cup is placed. The suction draws out a small quantity of blood.

The practice has Persian origin and is mentioned by the Egyptian-educated Greek physician Hippocrates. It is reported that Prophet Muhammad (PBUH) has once said, “Indeed the best of remedies you have is hijama, and if there was something excellent to be used as a remedy then it is hijama.”

While often used interchangeably, Hijama and bloodletting aren’t similar techniques. Bloodletting opens veins and bleeds patients, whereas Hijama draws blood to a specific location with suction and extracts it by perforating the skin.

Is It Good or Effective?

Athletes say they are using it to ease aches and pains, and to help with recovery from the physical toil of constant training and competing.

There are plenty of other recovery techniques competitors use – including sports massage, sauna, ice baths and compression garments – but US gymnast Alex Naddour told USA Today that cupping was “better than any money I’ve spent on anything else”.

“That’s been the secret that I have had through this year that keeps me healthy,” Naddour told the paper, adding that it had saved him from “a lot of pain”.

His team captain Chris Brooks added that many on the squad had started “do-it-yourself” cupping, with cups that can be suctioned with a pump rather than with a flame. “You’re like, ‘OK, I’m sore here,'” said Brooks. “Throw a cup on, and your roommate will help you or you can do it yourself.”

Belarusian swimmer Pavel Sankovich also posted a photo of his legs covered in a dozen of the little domes. 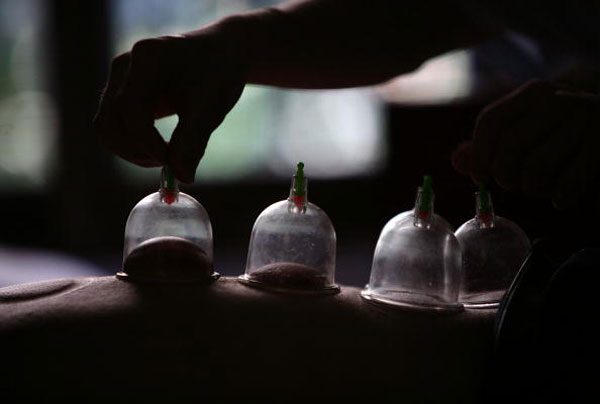 The British Acupuncture Council (BAcC) says cupping is not painful, and the red marks left on the skin are caused by blood being drawn to the surface and small capillaries rupturing.

The BAcC warns that on “rare occasions” the hot cups can cause mild burns. It has published rules of practice for cupping, and advises people only to visit properly-trained practitioners who are accredited members of their organisation.

Jackie Long, a traditional Chinese medicine practitioner in central London who has practised cupping for 20 years, says the idea is to help the flow of energy – known as traditional Chinese medicine as “qi” – around the body, and rebalance its equilibrium – “ying and yang”. The darker the mark left by the cup, he says, the poorer the blood circulation is in that part of the body.

While there have “certainly been satisfied customers for 3,000 years”, Professor Edzard Ernst from the department of complementary medicine at the University of Exeter previously told the BBC it was not a proven medical treatment.

He insisted it was a relatively safe practice, but added: “There is no evidence for its efficacy. It has not been submitted to clinical trials.”

Pharmacologist Prof David Colquhoun, from University College London, dismissed cupping as “hocus pocus” and told the BBC: “It’s just pulling up a bit of skin, it is not going to affect the muscle to any noticeable extent.

“And taken to extreme, it can cause harm, it usually doesn’t, it’s usually just a – what [British physician] Ben Goldacre would call – a voluntary tax on the gullible.”

However, a 2012 study in the journal PLOS One found that cupping could potentially be effective for some medical conditions such as acne and facial paralysis. Whether it works for athletes remains to be seen.