Qur'an | The Qur'an was verbally revealed by God to Prophet Muhammad through the angel Gabriel, gradually over 23 years, beginning on 22 December 609 CE.
aaa

In modern times we have become accustomed to living on our own as if God didn’t exist. Many people feel that religion is no longer relevant. They claims that modern books of science and progressive thinking have replacted the ancient books of religious teachings.

What about the Qur’an? Has this book become outdated as have many others?

Many areas of investigation lead to the conclusion that the Qur’an remains relevant to modern humans. Using the tools of our progressive thinking we can see that the Qur’an isn’t the product of humans. Indeed, it’s a divine revelation.

Consider for example the fact that modern science has led to the outdating of some ancient scriptures. Why has this not happened in the case of the Qur’an?

The answer is that the Qur’an expresses its ideas in an understandable manner to its first audience. But it similarly makes sense in the scientific age.

For example, the verse number 47 in Surat Adh-Dhariyat says that God created the universe with power. And that he’s expanding it.

The idea of the expansion of the universe wasn’t quite comprehensible at that time. People tended to think that God is expanding the provisions in the universe.

Over the last century, however, scientists have proved the expansion of the universe. Edwin Hubble first noticed this as he peered into his massive telescopes in 1929.

Penzias and Wilson won the Nobel Prize in 1964 for their discovery of Cosmic Background Microwave Radiation. These waves started at the time of the Big Bang explosion of time and space in its four dimensions.

Similarly, the verse 11 in Surah Fussilat in the Qur’an speaks of a time when the universe was dukhan. The first hearers of the Qur’an would have understood this word dukhan to mean smoke.

But a reader today can understand the word to refer to the gaseous mass out of which the universe emerged. This is explained by Dr. Maurice Bucaille in his book The Bible, The Qur’an and Science.

Moreover, the verse number 30 of Surat Al-Anbya’ in the Holy Qur’an speaks of the heavens and earth being joined together before God split them asunder. Today we would understand this as a reference to the familiar unified origin and eventual separation of the galaxies.

The same verse 21:30 says that God created every living thing from water. In the past people wouldn’t have been able to fully appreciate how true this statement really is.

But today we are quite aware of the watery origins of life. Hence the single Qur’anic verse contains more than one brief statement about observable phenomena and our most advanced knowledge of these phenomena has helped us to understand and believe in the Qur’an’s statements more than ever before.

One of the most exciting areas of discovery in this regard pertains to the growth and development of the embryo.

Prior to the invention of the microscope people could only theorize about the early stages of growth, and many of their theories would be laughable if suggested today.

The microscope came a millennium after the Qur’an already made accurate statements about the early stages of growth.

We must, therefore, ask how was this knowledge available at the time of the Qur’an’s composition in 7thCentury Arabia unless via divine revelation.

Several scientists in the field have testified to the accuracy of the Qur’an’s statements which they find to be far advanced for the time when they were made.

Dr. Keith Moore is the author of The Developing Human, a recognised textbook in the field of Embryology. In the third edition, on p. 8, he presented statements from the Qur’an as a marked advancement over the scientific knowledge of the field that was available at the time.

In a separate paper he has explained at length the remarkable correlation he finds between the Qur’anic statements and modern embryological data.

For example, the verse number 14 of Al-Mu’minun in the Qur’an mentions that God makes us like a leech at one stage. Dr. Moore shows that this description is accurate because at 24 days old the embryo does resemble a leech.

Moreover, it acts like a leech in that it extracts its nutrients from the mother’s blood. The same verse continues to say that after that God makes us into a chewed lump in the subsequent stage.

Dr. Moore shows that the embryo at 28 days old does look like a chewed lump, as the newly developing somites appear similar to the teeth marks we typically leave on a piece of chewed gum.

At 28 days old the embryo is no larger than a grain of rice. It could not have been studied without the use of a microscope. How then did this knowledge become available to find its way into the Qur’an if not by divine revelation? 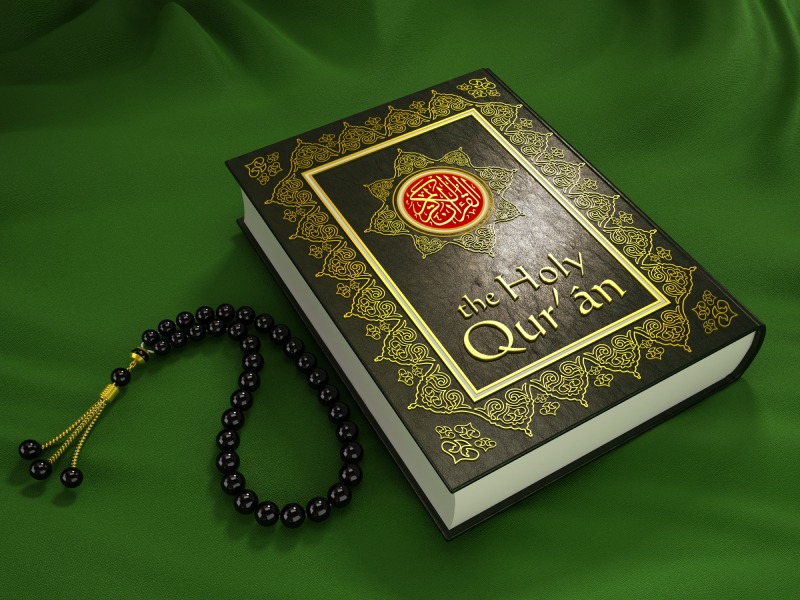 Likewise the words for Satan and Angel occur 68 times each in the Qur’an. The words of dunya and akhira occur 115 times each.

Another interesting area of modern study of the Qur’an is the arrangement of its words, verses, and chapters. Naturally, such elements convey meaning.

But one would hardly expect that the arrangement itself would be meaningful. For example, any book may say that there are 12 months or 365 days in a year.

But suppose we pick up a book, any book, and for the sake of curiosity we count the number of times it mentions the words ‘month’ and ‘day’.

What are the chances that it will mention the word ‘month’ precisely 12 times and the word ‘day’ precisely 365 times?

For that to occur by mere chance is so remote that we may suspect that the author deliberately planned to use the word that many times.

The history of how the Qur’an came to be available in the world is clear enough for us to assert with confidence that no human author planned this result. The alternative conclusion is that this is the work of God.

One may ask if this isn’t by chance, even though a very remote one. However, there are so many examples of surprising sums of letters, words, verses, and chapters in the Qur’an that it would be quite unreasonable to credit all this to chance.

For example, the verse number 59 of Surah Ali ‘Imran in the Qur’an says that Jesus is like Adam in the sight of God. This means that as far as God is concerned Jesus and Adam are both his creatures.

But there is another way in which Jesus is like Adam. The name Jesus occurs in the Qur’an 25 times; the name Adam also occurs 25 times. The two names are scattered throughout the Qur’an.

Seldom do they occur in the same chapter. For an author to have kept track of the number of times these words were in the book wouldn’t have been easy.

The Qur’an wasn’t, like other books, composed by someone privately and then made public only when the final completed and revised copy is ready for circulation or publication.

The earliest and only records about the Qur’an’s first availability to the world show that the book was recited by the prophet Muhammad, on whom be peace, in short segments over a period of 23 years.

The short recitals were often in response to questions put to him, sometimes by critics. Or, the short pieces may have offered guidance on newly occurring events. Or they may have even predicted future developments.

Hence, people could hardly have expected the prophet Muhammad as a human being to remember how many times he had recited all these words.

Nor would he have had any reason to do this. If he wanted to convince everyone that his is a great book then he might have told someone about this remarkable manner.

But these word counts were not known to anyone for centuries after the death of the prophet.

In 1938, however, an Egyptian scholar Fuad Abdul Baqi prepared a concordance listing all the words of the Qur’an and their location. Now we can see at a glance that the names Adam and Jesus seldom occur in proximity to each other; yet they occur 25 times each.

It is hard to avoid the conclusion that this result was planned. Yet this was never the plan of any human being. Hence we are looking here at the plan of God.

For a final example, consider the fact that the words for dry land (barr, yabis) occur a total of 13 times in the Qur’an and the word for sea (bahr) occurs 32 times. It turns out that 13:32 is the approximate ratio of land to water on the surface of our globe since there is about 28% land and 72% water.

Based on the evidence presented here, we may conclude that the Qur’an is an abiding wonder. It isn’t a relic of the past, but a guide for the future.

Whereas modern discoveries have cast doubt on many other ancient scriptures, similar discoveries demonstrate that some of the Qur’an’s statements contain knowledge that must have come from God.

The numerical arrangement of the Qur’an’s elements is unique to the Qur’an. Many attempts have been made to prove a similar mathematical phenomenon in other books.

But only in the case of the Qur’an was this successfully proved.  But the Qur’an isn’t about science or mathematics. Its message is about you and me; about where we came from and where we are heading.

The Qur’an informs us where we come from, where we are headed, and how to get to the right place by serving God and God’s creation.