In fact, your brain has a lot more to do with what you see than your eyes do.
aaa

Even though we think we see the world so fully, what we are receiving is really just hints, edges in space and time,” said Frank S. Werbin, Professor of molecular and cellular biology at the College of Letters & Science at U.C. Berkeley. “The brain interprets this sparse information, probably merging it with images from memory to create the physical world as we know it.”

Further evidence supporting the notion that ‘we do not really see everything around us’ was presented in this March’s Nature Magazine. The article showed that there are up to 12 output channels linking the layered cells of the retina to the brain, each carrying a different stripped-down image of the physical world (Sanders, p.1, 2). Communication takes place between each layer of retinal cells, much like a series of animated drawings, which are fast-forwarded on a rolling camera to create a 3D animated film.

However, unlike an animated film the human eye cannot control the images, especially if the human’s visual sensory organs are dependent on what the brain has recorded from previous exposure. In fact, your brain has a lot more to do with what you see than your eyes do.

After years of medical practice, Dr. William Bates (d.1931) a physician and ophthalmologist in the US, began to see vision as depending on (by at least 50%) on mental processes. He found that when the well being of the patients improved, so too did their eyesight. 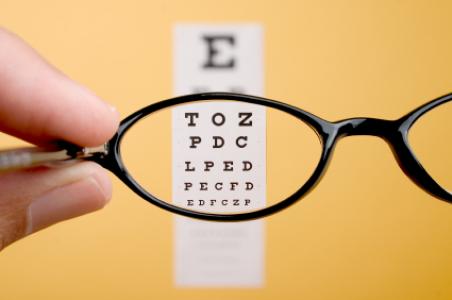 As a result, much of his work was based on the alleviation of stress, which affects the two oblique extrinsic layers encircling the eyeball. He developed a series of techniques which exercised the eye muscles and re-trained people to use their eyes in a relaxed manner.

These exercises came to be known as the Bates Method. Author Aldous Huxley, who initially needed powerful glasses to see and write, used the Bates Method and wrote in his Art of Seeing that, “They (ophthalmologists) have paid attention exclusively to eyes, not at all to the mind, which makes use of the eyes to see with.”

Bates Method practitioner, Evelyn Sage, believed that many eye defects are the result of fear, anger and anxiety – negative emotions that produce tension (Drury, 30-33). These negative emotions distort the faculty of reason, which Allah (swt) has blessed us with. When balanced, we see things as they are – “in a state of willingness, to surrender, to let go of anything. It is the beginning of the awakening of your inner sight. The awakening of intelligence.

If you are willing to let go of everything, whatever anxieties, fears, expectations, or desires you have, then your energy is available. Your intelligence is sharper. Your actions will be more successful because you can see whether they relate or not” (Haeri, p.118). Then, we are able to see things as they are and not as we want to see them.

The eye is also subject to a number of diseases, as well as to distorted mental perceptions. Cataracts, a result of malnutrition and toxicity (Stein 146); conjunctivitis due to bacterial/viral infections and allergies; astigmatism – distorted vision caused by differing curvatures in differing directions; and eyestrain (Readers Digest, p. 129) are among the afflictions that can be suffered. The most common eye problems are myopia (short sightedness) and hypermetropia (long-sightedness). Long-sighted people usually experience blurred vision and eyestrain.

However, modern science has come up with many solutions to correct inaccurate vision. Cataracts can be removed, corneas can be transplanted, and glaucoma can be treated. But, dead photoreceptor cells remain untreatable. Doctors have tried to transplant retinas but with little success so far, leaving millions of Americans with age-related macular degeneration and retinitis pigmentosa.

With gene therapy comes hope in the form of stem cells (‘seed’ cells are formed in the first days after human fertilization when every cell in one’s body can form any kind of human cell). Neural stem cells can form any kind of human cell, including retinal cells. Schepens Eye Research Institute and Harvard Medical School have demonstrated that these stem cells can be used to repopulate a damaged retina. Once in the eye, the cells migrate to the damaged retina and change into normal looking retina cells (Retinal Restoration, p. 1,2). Stem cell bioengineering however, cannot help those with nerve disorders (Smith 75).

They seeded harvested corneal stem cells directly onto an amniotic membrane (Gan, p. 1,4). The sixth patient, who was nearly blind in one eye from a chemical burn, recovered 20/20 vision in that eye. In a routine corneal transplant, the deformed/damaged ‘button’ cornea in the center of the eye is removed and replaced by a matching piece of clear, healthy cornea taken from a dead donor. These patients do not receive any stem cells (Seppa, p. 1).

While modern science struggles with the idea of the “mind-eye connection” and tries to solve vision problems mechanically, Islam provides answers to our vision problems by clearing our minds and calming us. This enables us, according to Dr. Bates, to see more clearly.