Can you imagine the special situation required of our bodies to adapt to extreme changes in weather? How do our bodies handle such changes?

In fact, Allah has provided us with very efficient systems for regulating our internal temperature, automatically maintaining a stable core body temperature in cold winters, warm summers, and wild swings between both extremes.

The normal core body temperature for a healthy human is around 37°C. However, this can vary by as much as +/- 0.6°C depending on the physical activity, metabolism, hormonal levels, and even the time of day.

In cold weather, if the core body temperature drops below 34.4°C, hypothermia occurs. If it continues declining, the temperature regulating system in the hypothalamus usually fails around 29.4°C, with death soon after.

As observed by the German biologist Carl Bergmann in 1847, humans in cold regions have greater body mass than those in warm climates.

The process of metabolism, converting food to fuel in our body’s cells, is accompanied by heat production. Therefore, greater body mass is equivalent to more cells, which produce greater heat for protection from cold.

In the short term, as when a sudden, drastic change in location to a cold climate occurs, physical acclimatization has also been wondrously designed into our body systems by Allah to protect us in this case.

By reducing blood flow to areas in closest contact with the cold, less heat is lost through radiation. However, if temperatures are below freezing, our bodies won’t maintain vasoconstriction, because frostbite would occur.

Cycling continuously between vasoconstriction and vasodilation, the body attempts to protect both stable core body temperature, and skin from freezing. 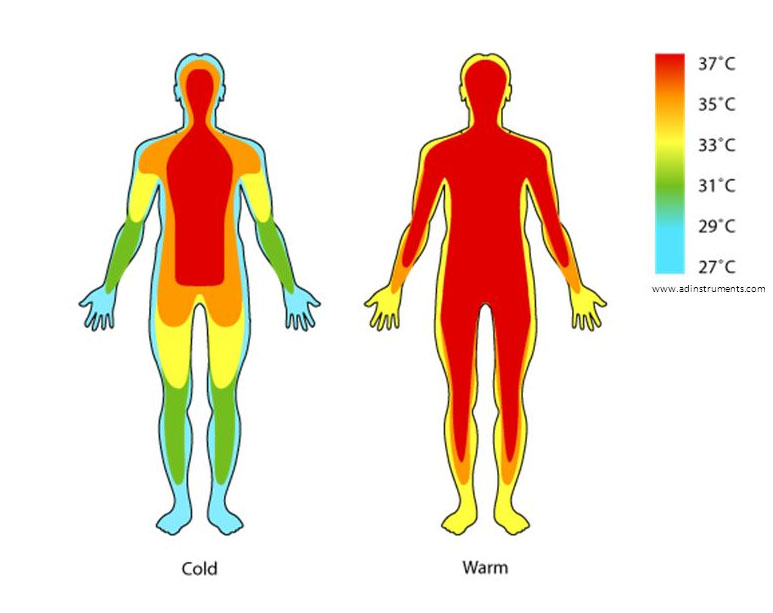 In hot weather, if the core body temperature rises to 40.6-41.7°C, hyperthermia occurs. This condition can be fatal within only a few days, due to internal organs deteriorating.

Though, Allah has also designed our bodies to protectively respond to heat. Radiation is responsible for reducing most excess body heat; but in hot, dry climates, evaporative cooling, or sweating, can be significantly more helpful.

As noted by Bergmann also, less massive bodies are the rule among individuals living closer to the equator.

This is due to the same relationship between metabolism and heat production, where less massive bodies have fewer cells, and thus produce less heat. As we see, Allah designs our bodies for our individual locations and circumstances.

As the weather heats up, body heat is radiated from our skin. First, bringing blood vessels closer to skin, vasodilation increases heat radiation from the body.

Then, sweating releases water to cool the skin as it evaporates. These processes cycle continuously to protect both a stable core body temperature and the skin from being damaged by heat.

However, sweating’s cooling efficiency is directly related to the degree of humidity in the air. When moisture content is high, sweat can’t readily evaporate. Without rapid evaporation, the cooling effect of sweating is reduced.

On the other hand, less body fluid is lost in high humidity conditions, protecting the body by retaining precious fluid and mineral salts.

In hot, dry weather, sweat evaporates quickly, providing an efficient cooling effect. Even though, rapid loss of water and salts from sweating is more significant in dry, desert conditions.

Over a quart of fluid an hour may be lost through sweating on a hot summer day in the desert. Replacing body fluids is critical to keep the body hydrated and replace lost mineral salts.

A lemonade juice with a bit of salt added can be a very healthy alternative to a commercial sport drink.

Adapting to Sudden Changes in Climate

With the sudden change of climates, a person going from a cold environment to a hot environment or vice versa experiences additional adaptations, provided by Allah for special protection in this case.

For example, when experiencing a hot weather within a period as short as a few days, the degree of salt in the sweat gradually decreases, and the volume of sweat increases.

This article is from our archive, originally published on an earlier date, and is now highlighted for its importance