Our relationship with food can at times be a grievous one. Counting calories and weighing ourselves constantly can make the eating process a burden rather than something to enjoy.

Becoming more aware of what we eat doesn’t mean restricting our diet to a certain type of food intake. It’s more about giving attention to how we eat. This concentrates more on the process rather than the food itself.

Eating can be looked upon as not only something pleasurable, but also as an act of worship. Thus, our Prophet (PBUH) emphasized eating as an act of worship by performing ablution prior it like prayers. He also advised us to have the intention—niyyah—of seeking Allah’s favor.

Like other acts of worship, this form of worship shouldn’t take up too much time. Dr. Abu Hendi says that we begin to feel full after 20 minutes of eating; regardless of the amount of food we have consumed. So, dedicating approximately 30 minutes to each meal would be better than wolfing it down.

Also, eating shouldn’t be made a secondary activity in order not to avert your attention from the food. 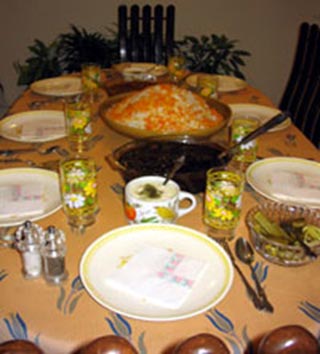 The first duty in Islam concerning eating is ensuring that the food is both permissible (halal) and comes from a permissible source. You should also feel satisfied with what Allah has provided you. And you should believe that these provisions are a blessing from Allah.

The Prophet (PBUH) once told `Ali ibn Abi Talib (may Allah be pleased with him), “O Ali! There are twelve rules a Muslim must learn to adhere to before (getting set up at) the table (of food), four of which are duties, four of which are Sunnah, and four of which are manners. Knowing what you eat and its source, mentioning Allah’s name prior to eating, being grateful for provisions, and being content with them are duties. Sitting on the left foot, eating with three fingers, eating from the food closer to you, and licking the fingers (used while eating) are Sunnah. Restricting the size of each mouthful of food, chewing very well, refraining from looking people in the face, and washing the hands (afterwards) are of manners.”

It’s best to eat three times a day. Try to eat a variety of foods; don’t shun bread, rice, fruit, or other foods in their natural form. Classifying foods as good or bad according to their calories can lead to depriving the body of essential needs; which may drive the body to react adversely.

Severely depriving the body of calories may result in cases of binge eating (excessive overeating). It can also lead to nocturnal eating. This occurs when a person gets up at night half asleep and begins eating large amounts of foods that they have originally avoided.

Try to change your usual sitting position while eating. Follow the footsteps of the Prophet (PBUH) by sitting either on both knees or on your left leg while keeping the right one upright.

It’s best not to change the position you choose before you finish eating. If this position doesn’t suit you, you may take the position you prefer most. But, try not to lean on anything. The Prophet (PBUH) would seat himself attentively before food.

First and foremost say “bismillah” (in the name of Allah) before your first mouthful. It would be preferable to begin your meal with some fruit.

If you are using fingers, and you wish to use the first three fingers on your right hand (starting with the thumb), try as much as possible not to involve the last two fingers while eating to buffer yourself against overeating. Incorporating the fingers into the eating process has several merits. This includes increased awareness of the food you eat and pleasure from enjoying the food’s texture. 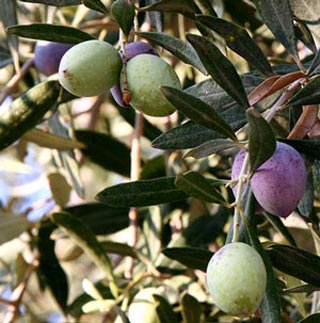 Avoid using your left hand while eating unless you are left-handed, though you may use it to peel fruits or separate meat from bones. In any case make sure that your left hand does not carry any food up to your mouth (due to explicit and strict cautioning against this in the Sunnah).

A merit of using just one hand while eating is to decrease the amount of food a person consumes, in addition to increase awareness of the food one is eating.

Each time you notice your left hand involved in the eating process you should pull it back and attempt to complete eating with just one hand. This will help prevent slipping into excessive eating.

Training yourself to adhere to this procedure may not be easy at first. But, repetition and ongoing trials along with your persistence to follow the Sunnah will gradually facilitate the matter.

After bringing something to your mouth with your right hand, don’t extend your hand once again to the plate before properly chewing and swallowing your food.

This may be very difficult at the beginning, but this is the fashion by which the Prophet (PBUH) ate. Gulping down food without proper chewing, or eating in a hurry is not healthy.

This is an important reason behind obesity and overeating. Since the feeling of satiety comes after twenty minutes of eating, we must train ourselves to chew food properly and not to reach out for more food before finishing what’s already in our mouths.

After finishing your meal, it is sunnah to lick the three fingers you used while eating. Don’t be disgusted to lick your fingers, if you used them, after you finish eating, since these fingers carried the food to your mouth.

After you finish your meal, thank Allah and express your gratitude to Him, for this is an imperative duty. After a meal, the sunnah is to wash your hands and mouth, and it is preferable to renew your ablution.

The above steps are guidelines for those who wish to keep in shape and maintain their ideal weight. These steps do not involve resorting to the pains of modern dieting, and rely completely on the Sunnah.