In our highly regimented, fast moving, competitive environments, we frequently complain of unresolved feelings of alienation, inadequacy, and personal powerlessness.

Many face a constant feeling of insecurity, and worry about their own basic survival and ability to measure up. This stressful lifestyle produces many types of mental and physical illnesses in modern societies (1).

As it is not possible to change the style or pace of our modern life, we need to discover suitable mechanisms to cope with daily stress (2).

The Prophet Muhammad (may the peace and blessings of Allah be upon him) told us that we could find this internal peace and relaxation during praying.

It was reported by Imam Ahmad in (Al Musnad) that the Prophet (May peace and blessings be upon him) has told Bilal “call for the prayers, it will comfort us.”

The body tends to show signs of chronic stress very gradually, so the onset of stress may actually go unnoticed in its early stages. Symptoms of stress may appear so gradually that some people are unaware of the severity of their stress condition until they suffer a general nervous breakdown (3).

It was found that when one is experiencing stress, one’s brain produces high levels of two specific hormones: adrenaline and cortisol. This response is called the “Fight or Flight response”. The body prepares itself for a fight or for an escape from a fight by releasing these two hormones, which gives the body a temporary increase of strength and energy (2).

This hormonal response mechanism is considered to be “the general stress response syndrome”. This chemical stress response is entirely appropriate for the short-term. It is these hormones that make one able to respond more efficiently, both physically and mentally, to the hazards in one’s environment (4).

These hormones are not normally dangerous in the short-term. The problem only begins to surface when these messages of danger or emergency continue to be broadcast from the psyche over long periods of time.

The situation gets worse when there seems to be no option to confronting the stressful situation directly, or to escaping from it in any way.

Feeling trapped by the circumstances, the mind responds to the permanent warnings of impending emergency by manufacturing more and more of these hormones.

Ultimately, these hormones have no physical or mental outlet and the energy just implodes, collapses in on itself, and produces a chaos of energy (3).

The response to stress can be divided into three stages:

In addition, they can be classified according to their effects on individual health into a good type of stress (eustress) or a destructive type of stress.

Good stress is defined as the ability to respond to the challenges of life in a way that promotes stimulation and encourages personal growth; stress management tools can facilitate this reaction. Examples of destructive, unhealthy reactions to stress are feeling overwhelmed or anxious (2).

This stressful life can produce many types of mental and physical illnesses and imposes its effects on body, psyche and mind.

If the body’s immune system is allowed to deteriorate because of stress, it may lead to other serious medical conditions such as a variety of malignancies (3). 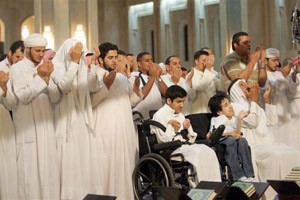 Those who are extremely stressed can find peace and relaxation by utilizing different Islamic ‘oases’.

Medicine may be necessary for a person in the most critical stages of chronic stress, but medicine alone may not be enough to achieve a cure for all its symptoms.

Scientists are trying to find new strategies to cope with stress and minimize its effects.

These include relaxation techniques, meditation, imagination (2, 5) and Yoga (6). These techniques are extensively studied to determine their effects and mechanisms of action.

Different studies have confirmed the efficacy of these techniques in coping with stress and eliminating its effects. These techniques are now entering the medical mainstream and are included in many treatment programs (2).

Most of these techniques are rooted in Islamic spirituality and different Islamic forms of worship, ‘ibadatat, which can be – if performed in the correct manner – considered as good tools for coping with life’s stresses.

Those who are extremely stressed can find peace and relaxation for their minds, body and soul utilizing the following different Islamic ‘oases’; in terms of a safe place where one can seek refuge from the ‘desert’ of life:

The stress reaction is activated by neural perceptions or by what amounts to one’s worldview. A worldview can be described as the prism of ideas and beliefs through which the world is perceived and judged. This means that your worldview becomes central to the way any stressful circumstance is handled (2, 3).

Islamic spiritual practices can dramatically alter your worldview and thereby restore your feelings of self worth and personal meaning, giving you a feeling of deeply rooted power and control.

Control has been found to be a key factor in the psychology of chronic stress. It has been observed in clinical studies that the extent to which you feel that you are in control of your environment, is the extent to which you will, or will not, experience the hormonal stress response. Those who feel most powerless or unable to control their circumstances tend to experience the highest levels of stress.

On the other hand, those who feel they have great personal control and power over themselves and their environment will be much less likely to experience the hormonal stress response, and this is regardless of the potential seriousness of the threat (2). In Islam, Muslims feel Allah, Who controls the whole world and all the creatures in it, supports them.

It was reported by Omar may Allah be pleased with him that the Prophet has said:“if you people depended on Allah as you should, He would provide for you as he provides for the birds leaving their nests hungry and coming back satisfied.”

In this way one learns to quiet the thought traffic in one’s mind, thereby freeing up mental and physical energy. The basis of meditation is to adopt a posture of body and mind that allows one to remain comfortable for long periods of time without expending significant amounts of energy (7).

In the mid-1980s, Dr. Dean Ornish, clinical professor of medicine at the University of California, incorporated an extensive meditation program into a comprehensive lifestyle program for patients with heart disease. Data published from his five-year trial revealed reductions in total and low-density lipoprotein (LDL) cholesterol, decreased anginal symptoms, and regression of coronary artery disease (9).

For example, reports from Dr. Benson’s work show that oxygen consumption diminishes by 8 percent during restful sleep over the course of four to five hours, while the relaxation response results in a 10 to 17 percent reduction of O2 consumption in a matter of minutes (4).

Also, meditation was used intensively and effectively in control of cases with chronic pain (12) and anxiety disorders (13). Meditation by concentrating on Allah’s creatures (plants, animals, space, human body, etc.) is considered one of the most efficient and powerful forms of Islamic worship.

In this form of meditation, one concentrates on an object or group of objects from the same category (categorical meditation). 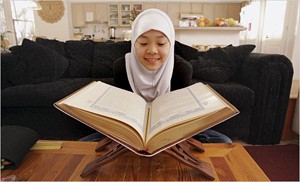 Muslims can find their safe place through imagining what will be present in the Paradise.

Those who remember Allah standing and sitting and lying on their sides and reflect on the creation of the heavens and the earth: Our Lord! Thou hast not created this in vain! Glory be to Thee; save us then from the chastisement of the fire: (Surat Ali imran 3: 192).

Meditation can also be performed by concentrating on one word or a few words that give the person a sense of internal peace and calm; for example by repeating the words subhan Allah (glory be to Allah) or al-hamdu lillah (all praise be to Allah).

Deep and silent repetition of such words produces the same physiological effects of meditation (7).

It also adds an additional factor that helps in stress elimination and that is giving the individual the feeling that he or she is in extreme proximity with Allah, the Controller of the whole world.

Those who believe and whose hearts are set at rest by the remembrance of Allah; now surely by Allah’s remembrance are the hearts set at rest. (Surat Ar-Ra`d 13:28).

Abu Hurairah, may Allah be pleased with him, reported: Allah’s Messenger (may peace be upon him) said: Allah, the Exalted and Glorious, said: I have prepared for My pious servants’ bounties which no eye (has ever) seen, no ear has (ever) heard and no human heart has ever perceived.”

O you who believe! seek assistance through patience and prayer; surely Allah is with the patient.(Surat Al-Baqarah 2: 153).

It was reported by Gaber may Allah be pleased with him that the Prophet has said: “your prayers are like a flowing river at your doorstep you wash yourself in it five times a day”.

Nowadays, doctors suggest that praying can be used as an alternative therapy as successfully as meditation, exercise, or herbal treatments. According to Koenig of Duke University, “when prayer uplifts or calms, it inhibits cortisol, epinephrine, and norepinephrine – hormones that flow out of the adrenal glands in response to stress.

These fight-or-flight chemicals, released over time, can compromise the immune system, upping the odds of developing any number of illnesses, including heart disease, stroke, peptic ulcers, and inflammatory bowel disorder (IBS).”

Many experts feel that the immune system is strengthened and nourished by a sense of peace elicited during praying. Many doctors believe that praying with their patients before and after surgery or before administering a course of powerful drugs might actually assist in the patient’s recovery (15).

Five prayers have been prescribed to us daily. This is a good chance to make use of that time not only for spiritual enhancement but also for physical and psychological healing.

Although Ramadan has passed, its spirit should still be fresh in our hearts and minds. Investing this spirit into our daily prayers and meditations could well be the way to a stronger and more relaxing mental health.