The first known hospital in Islam was built in Damascus in 706 A.D.
aaa

The capital of the Islamic caliphate empire kept changing from one dynasty to another. In each capital, an important medical center developed. Thus, by the end of the 13th century, there were many medical centers spread throughout the Islamic world.

As this is an expansive subject in history, Space does not allow the description of all the hospitals built throughout these centuries. We, therefore, have chosen some of the important institutions, which will be described according to the region where they were developed in.

Ash-Sham at that time included what is known now as Syria, Lebanon, Jordan, and Palestine., Damascus and Jerusalem were the important cities.

This hospital was built during the Crusades War, hence the importance of it being built was to fulfill a need for a well-equipped and well-staffed hospital. It turned out to not only be first class in care, but the hospital also was an excellent first class medical school. It is important to understand why books were expensive and limited in number in the middle ages.

The hospital adopted medical records, probably being the first in history. From its medical school, many eminent physicians graduated, for example Ibn Anl-Nafis, the scholar who discovered the pulmonary circulation system. The hospital served the public for seven centuries and parts of it still exist today.

Jerusalem: In 1055 A.D., the Crusaders built Saint John’s Hospital. By the end of the 11th century, it expanded to such an extent to include a hospital, a palace for knights, and a convent for the nursing sisters. The medical activities of the hospital were tremendous because of the large number of daily admissions of patients, pilgrims, and wounded soldiers.

After the liberation of Jerusalem by Salah ad-Din in 1187 A.D., the hospital was renamed was changed into Al-Salahani Hospital. He expanded the hospital, which continued to serve the people until its destruction by an earthquake in 1458 A.D.

Baghdad: In 750 A.D., Baghdad was elected and built to be the capital of the Abbasid dynasty by the Caliph Abu-Jaifar Al- Mansur. In 766 A.D., he assigned the dean of the medical school of Jindi Shapur, Judis Ibn-Babtishu’, to be the court physician and establish hospitals proportionate to the glory and prosperity of Baghdad.

When Harun Arl-Rashid followed (786-809 A.D.), he ordered the grandson of Ibn-Babtishu and his court physician, Jibril, to build a special hospital named Baghdad Hospital. This hospital developed into an important medical center. One of its chiefs was Al-Razi, the eminent internist.

Another important hospital was named Al-Adudi Hospital. It was built in 981 A.D. after King Adud Ald-Dawlah. It was the most magnificent hospital built in Baghdad before modern times. It was built at the request of the Caliph, who wanted to outdo his predecessors.

It was furnished with the best logistical equipment and supplies known at the time. It had interns, residents, and 24 consultants attending its professional activities. Haliy Abbas, who wrote the famous book Liber Regius (Al-Malaki), was a member of staff. It was destroyed in 1258 when the Mongols, led by Holagu the grandson of Genghis Khan, invaded Baghdad. 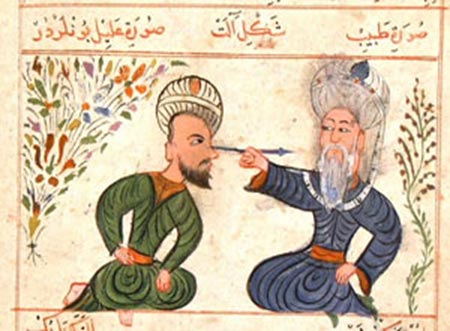 Al-Fustat: In 872 A.D., Ahmed Ibn-Tulun built a hospital called Al-Fustat Hospital in the city Al-Fustat, which is now Old Cairo. It served the growing Cairo population for six centuries. It was divided into separate wards. On admission, the patients were given special apparel while their clothes, money, and valuables were stored until they were at the time of their discharge.

On recovery, he vowed that if he ever became the ruler of Egypt, he would build a great hospital in Cairo, even more magnificent than An-Nuri Hospital, for, the sick, poor, and rich alike. At the inauguration ceremony, he asked for a cup of lemonade from the fountain, which was normally filled with water. After drinking it he declared that by taking it, he was signifying that the hospital was serving all people from the king to the least of his subjects. (Hamarneh, 1962).

This was the best hospital built at that time as reported by the contemporary travelers and historians of that time such as Ibn-Battuta and Al-Kalkashandi. It was divided into different sections according to medical ailments for different diseases. Music therapy was used as a form of therapy treatment for psychiatric patients.

It served 4,000 patients daily and the patient’s stay in the hospital was free. Moreover, on his discharge, the patient was given food and money for compensation for being out of work during his hospital stay. Al-Mansuri Hospital has served Cairo for seven centuries since it’s opening has been built. It is now used for ophthalmology and renamed Qalawun Hospital. Its magnificent ancient door is preserved in the Islamic Museum of Cairo.

Tunisia: In 830 A.D., Prince Ziyadat Allah I, built Al-Qayrawan Hospital in a district of the Qayrawan city called Adl-Dimnah. Subsequently all hospitals in Tunisia were called Dimnah instead of Bimaristan as they were called in the East, which is a Persian word meaning a hospital. The Qayrawan Hospital was characterized by spacious separate wards, waiting rooms for visitors patients, and female nurses from Sudan. The hospital also had a prayer hall. 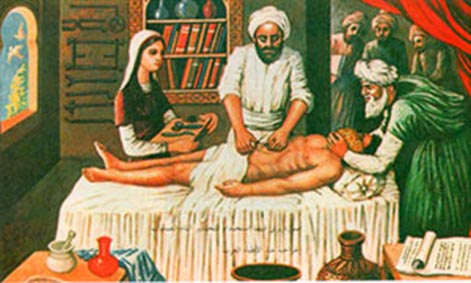 Morocco: In 1190 A.D., The king Al-Mansur Ya’qub Ibn-Yusuf built a hospital in the capital city, Marakesh, and named it the Marakesh Hospital. It was a huge hospital beautifully landscaped with fruit trees and flowers. Water entered all the sections through aqueducts.

Patients were provided with special apparel: one for winter and another for summer. The pharmacy was taken care of by specialists called the Saydalah and there was an expensive private section where each patient was charged what is equivalent today to $1,501 a day. One thousand years ago, this fee was quite expensive.

In 1366 A.D., Prince Muhammad Ibn-Yusuf Ibn Nasr built the Granada Hospital in the city of Granada, which had a population of expanded to half a million population. The hospital represented the beauty of Islamic architecture in Spain and served the people until the fall of Granada in 1492 A.D.

This article was first published in 2005 and is currently republished for its uniqueness and importance.