The holy Qur’an says: {It is not permitted to the Sun to catch up the Moon, nor can the Night outstrip the Day, and they all swim in an orbit.} (Surat Yasin 36:40).

And also: {It is He Who created the Night and the Day, and the sun and the moon: all (of them) swim in an orbit.} (Surat Al-Anbya 21:33). Allah clearly tells us in those two qur’anic verses that celestial bodies revolve in orbits.

Three days ago, on January 1, 2017, our home planet has completed an entire revolution of 2016 around our local star, the sun. And it has also started a new round for more 356.5 days. 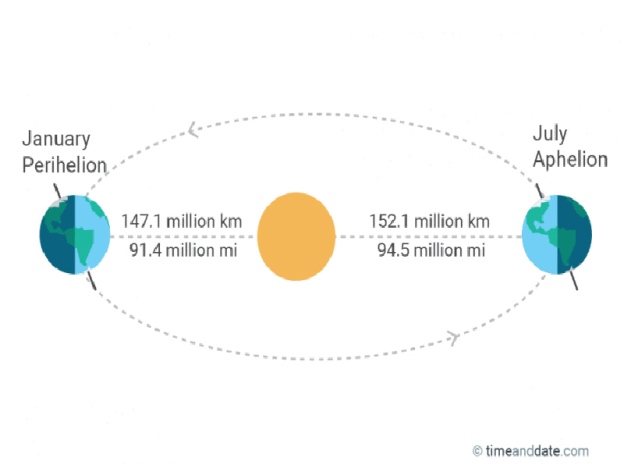 However, today (Wednesday January 4) our big blue marble is at its perihelion, or the closest point from the sun.

Wait… but why are we shivering at the peak of our winter!

Perihelion can be considered a “Supersun” in comparison to the “Supermoon”, when a full moon coincides with the moon’s closest distance to Earth.

Yet, Supersun takes one year to occur, while Supermoon happens each month. That’s due to the smaller orbit of the moon around the earth in comparison to Earth’s orbit around the sun.

The Earth today is only about 147 million km away from the sun. On the other side, when we reach the aphelion, the Earth is at its farthest site from the sun, at about 152 million km.

The perihelion doesn’t affect seasons, as it occurs when the northern hemisphere is in winter and the southern hemisphere is in summer. “Because we are closer to the sun, doesn’t mean it will be warmer,” Faherty explained. Since the sun is so far away, the few kilometres difference between perihelion and aphelion don’t have the major impact on our climate. The tilt of the Earth, not its proximity to the sun, is what affects seasons.