Asteroid | Asteroid mining is the exploitation of raw materials from asteroids and other minor planets, including near-Earth objects.
aaa

News about approaching asteroids and comets like Asteroid 2014 RC zooming safely by Earth are really catchy and shocking, but could they be profitable?

Humans started to mine Planet Earth thousands of years ago. Can they use these centuries of expertise to mine other planets and celestial bodies in the coming years?

In August 6, 2014, the European Space Agency‘s Egyptian-named space probe Rosetta completed its decade long journey across space to meet up with its target, Comet 67P/Churyumov–Gerasimenko, making it the first spacecraft to rendezvous with a comet.

Just about 50 km away from the comet, Rosetta was traveling in front of it at an average speed of about one meter per second. Rosetta team planned to place the spacecraft in orbit around the comet in a couple of weeks where it stayed for the remainder of its planned mission.

In November 2014, the European spacecraft that commemorates the Egyptian Civilization’s contributions to humanity was lowered to ten km to deploy its attached Philae lander on the comet’s surface.

The lander that is named after an Egyptian renowned Nile island uses its onboard microscopes to get a closer look at the surface, and it drilled about 25 centimeters into the comet to pull material up for analysis.

As this mission clearly helps us understand more about the makeup and resources on small Solar System bodies, the aim of mining comets and asteroids is getting closer and closer.

So What is the Difference Between a Comet & an Asteroid?

Some comets are believed to be as much as 50% water – dirty snowballs so to speak. Comets generally have very eccentric orbits, and spend most of their time in the outer Solar System, having the innards baked out as they make their passages around the sun.

On the other hand, asteroid orbits are less extreme; it is possible that some asteroids could be extinct comets, waiting for their reserves of ancient water to be discovered.

Announcements of celestial bodies mining companies, like Planetary Resources, raise some of the most-asked questions about this enticing but complex endeavor include, what asteroids do we mine? Which are the easiest asteroids to get to? Could it really be profitable?

Happily the initial answers to those questions are available on a website that estimates the costs and rewards of mining rocks in space. Called Asterank, the website uses available data from multiple scientific sources on asteroid mass and composition to try and compute which asteroids would be the best targets for mining operations.

So, which asteroids are most profitable, valuable, easily accessible and cost effective?

“And if you should count the favors of Allah , you could not enumerate them. Indeed, Allah is Forgiving and Merciful.” (Surat An-Nahl 16:18). 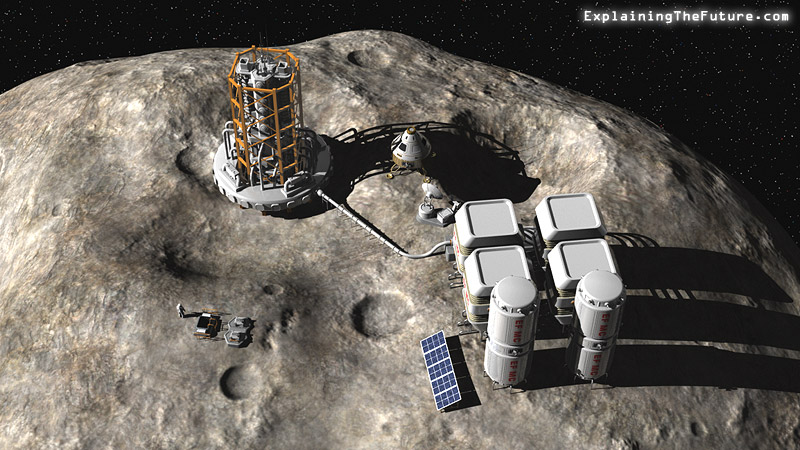 The winners are, according to Asterank:

Most Profitable: 253 Mathilde, a 52.8 km-diameter C-type (carbonaceous) asteroid that has an estimated value of over $100 trillion and estimated profit of $9.53 trillion (USD).

Most Cost Effective: 2000 BM19, a very small O-type asteroid (less than 1 km wide) that makes several close approaches to Earth. Its estimated value is $18.50 trillion and an estimated profit of $3.55 trillion.

Most Accessible: 2009 WY7, another small asteroid with regular close approaches of less than 1 AU. This is an S-type asteroid, a silicaceous or “stony” object that has a high accessibility score on Asterank of 7.6577.

Asterank combines both the economic and scientific features of over 580,000 asteroids in our solar system, looking specifically for platinum-group metals and water. It was created by Ian Webster, a software engineer in the San Francisco Bay Area.

“I’ve always had a strong interest in astronomy and especially space exploration,” Webster said via an email to Universe Today. “The commercialization of space through ventures like asteroid mining really excites me because I believe it’ll open space to the rest of us and improve human quality of life. My day job is at a startup unrelated to space, but my hobbies include building rockets and many side projects like this one. I have a lot of fun applying computer science in different ways and I hope that Asterank will educate and inspire people.”

Webster provides a caveat, however, to the rankings of the top 100 asteroids in each category. “Scientists know shockingly little about the composition of asteroids,” he writes on the website. “Visit JPL’s Small Body Database and you will notice how sparse information is.”

So, this means that there aren’t really ‘experts’ in this field, and even those most knowledgeable about asteroids likely don’t have the numbers needed to completely and accurately estimate the true value of an asteroid or the cost of mining it — “which is why Planetary Resources is going to spend years or even decades investing in LEO-telescopes and data-gathering flybys before they ever touch an asteroid,” Webster said.

Webster has used databases, websites, books and other publications to get as much accurate, up-to-date information as possible, but even then, he said everything on the website is a rough estimation.

“The primary purpose of this site is to broadly educate and inspire, rather than provide completely accurate data — which is currently impossible,” he said. “I created the site in response to the announcement of Planetary Resources. “I should point out that nearly all the measurements and hard data come from the scientists at NASA JPL, but I had a lot of fun putting the site together.” And it is fun to peruse the various categories and see what asteroids make the top of each category.

The ranking takes into account the value of the materials on the asteroids such as metals, volatile compounds, and water; the costs of getting to an asteroid and moving the raw materials: and the comparative savings and potential profit, which at this point are very hypothetical, taking into account processing and moving raw material.

“We really don’t know yet how much it will cost to mine an object millions of miles away,” Webster said. While this website is a first step, it offers an exciting and enjoyable initial look at the potential commercial viability of space mining.