Hajj | Allergy inflicts some people due to abnormal interaction between a natural substance and part of the body.
aaa

Allergy may inflict any organ in the body; the eyes, nose, stomach, arms, legs or so on. But it has different names with each organ. This includes running nose, influenza, hay fever, summer common cold, and urtecaria. In addition to, spasmodic chest disease, spring cattar, recurrent bronchitis and brochial asthma. All these diseases are different kinds of allergy, as people say: “One’s man’s food is another man’s poison.”

Allergy inflicts some people due to abnormal interaction between a natural substance and part of the body. That is to say, millions of people come in contact with chemical substances, smocks, dust. They also eat different kinds of food without contracting any kind of allergy; because no abnormal interaction takes place within their bodies due to these things.

In other cases, people contract spasmodic chest diseases due to inhaling the vapors of perfumes, painting substances, and dust. Or they come in contact with raw cotton, fur, or pollen, and specific kinds of germ. Whereas many people don’t suffer from such things.

When the body contracts allergy, it produces protective chemical substances to stop the irritation that happens due to abnormal interaction. Such substances contain histamine, and that’s why the medicines made for such diseases are anti-histaminic.

The effect of such interaction appears in the irritated organ. If the nose gets irritated by abnormal interaction, then one is liable to contract hey fever and sneezing.

Such case is known medically as allergic rinitis. If the most irritated organ is the chest, one gets inflicted with asthmatic cough or, in other words, allergic pronchitis.

In most cases the skin gets irritated due to abnormal interaction taking place inside the body. Skin allergy is commonly called urtecaria or ekzima.

There is no danger on the pilgrims who are liable to skin allergy. Rather, danger lies in cases of allergic pronchitis, because the labour of Hajj may cause irritation in the chest causing pronchitis asthma.

So, it is better for people who suffer from allergic pronchitis to postpone performing Hajj untill their disease ends or even controlled.

As for those who suffer from skin allergy, there is no problem as they can easily go for pilgrimage, taking with them anti-histaminin medicines, such as Tafagil tablets and others, to use them when needed.

Yet, pronchitis patients should know exactly the urgency of their disease and consult their doctors before they decide travelling for Hajj, so that they may take with them some medicines for emergency. 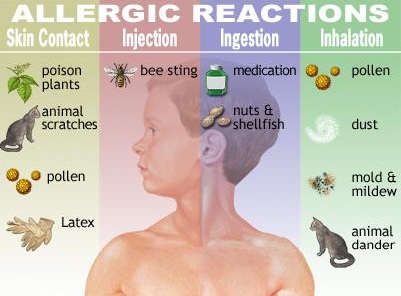 There is no specific regime for allergy patients during Hajj, except in cases in which people contract allergy due to having specific kinds of food.

In such cases, the most effective therapy is abandoning the kinds of food that cause allergy, such as some fruits, like banana, mango, straw; chocolate; egg, milk and fish.

Some people contact allergy as a result of taking some medication, such as Asperin, Salfa, pencillin and other medical substances.

How can allergy patients adapt themselves to hot weather?

No one can deny the toil the pilgrims suffer during the journey of Hajj, so that they lose a great amount of the liquids and salt of their bodies. So doctors advise those who are going for Hajj to drink abundant liquids and to eat salty foods, unless they are suffering from heart diseases due to allergic pronchitis.

Also, patients who are going for Hajj should by all means avoid all types of labour and take shelter against the rays of the sun and evade overcrowdedness.

There is nothing wrong for allergy patients to observe fasting during Hajj, unless it is necessary to have a certain medication at regular times. Moreover, fasting does not negatively affect allergy patients so long as they evade exerting great efforts and they avoid overcrowdedness and avoid being exposed to the sun.

In a nutshell, while performing Hajj, allergy patients should neither expose themselves to hard labour or overcrowdedness, nor stay in closed places that have no access to fresh air.

Also, patients should consult their doctors before going to perform Hajj. Doctors, for sure, are the one who can prognose the patinets’s case, and diagnose the right prescription.