During Medieval times, almost all Christian theologians accepted the Ptolemaic Geocentric Greek view of the universe as an absolute universal truth. The Catholic Inquisition punished those who, like Galileo, dared to voice other ideas.

I don’t know why they believed that the rarity of life in our universe proves that God must have created life only on this planet. Perhaps they believed that if intelligent life exist on other planets; it would diminish the miracle of God’s creation of Human Beings.

However, for me the opposite is true. That God’s universal creation is full of life is simply the result of God’s mercy and love of all living things.

The Holy Qur’an and the Hebrew Bible both teach that the Living God created the whole universe to be conducive to the universal evolution of life.

The Hebrew Bible says in the Zabur of Prophet David, King of Israel; “Your kingdom is a kingdom of all the worlds; and Your dominion is for all generations.” (Psalms 145:13).

In January 2013, astronomers estimated that there could be at least 17 billion Earth-sized exoplanets in just our galaxy; the Milky Way. They also said that one in six stars could be hosting an Earth-sized planet in a close orbit.

First, at a meeting of the American Astronomical Society (AAS) this January, NASA’s Kepler Space Telescope team announced its 1,000th discovery of a planet outside our solar system.

This brings the total number of confirmed exoplanets to 1,795, with an additional 4,000 possibilities also located by Kepler.

Twenty years ago we had no proof at all that our planetary system wasn’t unique in the universe. Now we know that we are one of thousands. 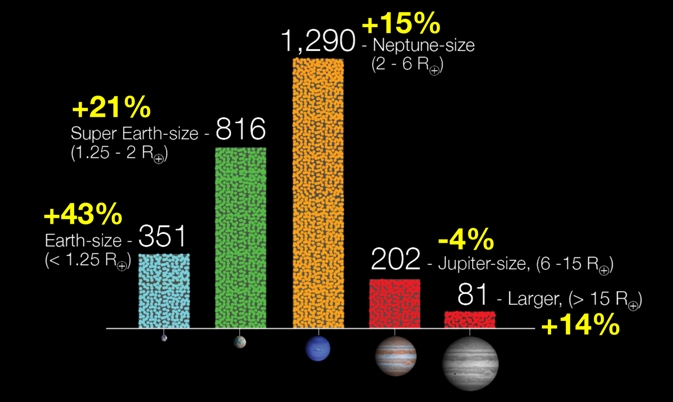 Are We Single or Unique?

Second, the Kepler Space Telescope has discovered a star with three planets only slightly larger than Earth. The outermost planet, which is 50% larger than planet earth, orbits in the zone where surface temperatures could be moderate enough for liquid water and perhaps life to exist.

In fact, this means that proof that Allah’s universe can be full of life is literally coming closer and closer.

The discovered star is a cool red M-dwarf, about half the size and mass of our own sun. Roughly three-quarters of the stars in our galaxy are M dwarfs.

M dwarf stars burn their fuel slower than larger stars and thus provide more time for life to evolve on any planet with the right conditions.

At a distance of only 150 light years, that star ranks among the top 10 nearest stars known to have transiting planets. Its proximity means it’s bright enough for astronomers to study the three planets’ atmospheres to determine whether they are like Earth’s atmosphere and possibly conducive to multicellular life forms.

For those who believe in the One God of all the inhabitable worlds, these two new scientific studies aren’t shocking.

Also, because both Muslims and Jews had many philosophers who were critics of Aristotle’s and Ptolemy’s science, most medieval Jewish and Muslim religious leaders didn’t feel they had to prevent new science from disagreeing with Greek science.

Thus, even as new discoveries always change the scientific understanding of God’s universe; the religious belief that the whole universe exalts God and reveals God’s glory remains the same.

Muhammad Hilmi Kutlubay. “Let us unite under the creed of Ahl-isunnah, under the guidance of ayahs and sunnah”. P.23.