The high cost of Islamic schools is the tip of an iceberg that refers to a deeper managerial challenge, according to Shahyar, who has a career in corporate strategy and two kids in an Islamic school in Atlanta.

“The way the model is set up is broken from the start,” speaking about several schools he interacted with. “You are only catering for a specific group of people or a smaller set of people which automatically elevates your cost and not a lot of parents will be able to send their kids,” Shahyar adds. Because of the high cost, there are fewer parents able to afford Islamic schooling, and hence the income of the school stays low compared to the high cost of facilities and staff.

What follows, according to Shahyar, are managerial decisions to invest less in their teaching staff who are already underpaid.  “Islamic schools really struggle with having some mechanism to provide the same level of training and skills and coaching to uplift the capabilities of the teacher and also retain them.”

This gets reflected directly on the quality of education the students get compared to the public schools that are well funded by the government.

Because of resources and lack of proper training “it is very much about ‘here is the curriculum, and what has to get done’ and you push this to the students and say you need to have this homework done,” Shahyar explains. In public schools there is more customized training and interaction with the students, the teaching model is more engaging.

For other parents, there are other kinds of problems to worry about. Karim, whose son is soon to enter school in Denver, Colorado, is concerned about the ideological twist the school might carry about the Islamic teachings they will be teaching his son.

“For example, if the teacher is very extreme in his or her view about a certain thing I would not want my kid to come back home feeling that this is the only right way of doing it and deeming others as doing sins or doing wrongdoings,” he explains.

On the bright side of the story, Islamic schools do play a key role in developing the Muslim identity of the children. “Once a foundation has been set where they feel comfortable in their own identity, they are able to understand what it means to be Muslim, I think as they get out they will be in a better position to navigate” life outside, Shahyar says.

That safe environment created by the Islamic schools makes the children feel the sense of community and peer support, and creates a “curse free drug-free” zone, according to Ambreen. Afsha – a mother of three from Connecticut – adds that there is a control over the curriculum, salah being done on time in the congregation, halal food provided, and students studying Qur’an and Islamic studies in addition to the secular curriculum.

Once again, so if public schools along with Sunday schools is not a good option, while Islamic schools carry their own weaknesses that will impact the quality of education the child will get, what is the best option? The answer: at home! At least that is what most of the parents we spoke to say.

Homeschooling As A Way of Protection? 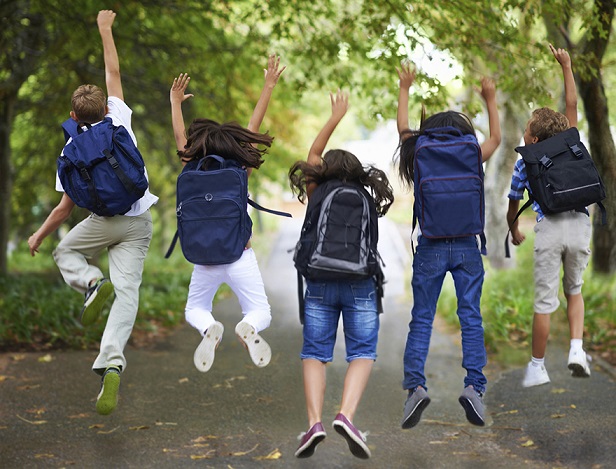 Rear-view of five children jumping in the air wearing backpacks

The Best School is Your School

“The reference is the house […] how you raise and much quality time you give to your children,” Imam Zakirullah affirms. Whether a parent decided to send their kids to an Islamic school or a public school, there must be a mechanism to amend the weaknesses of either system at home.

At one point in their lives, those Muslim children will get out there to interact directly with the non-Muslim community. Unless they are prepared for that moment then the consequences might be not remediable. Imam Zakirullah lays is clear, “when I see the kids here, I say that I am scared that if they face a little bit of difficulty like the Muslim youth are facing outside of America I fear that they will leave the deen.”

“It better to face those challenges and handle them slowly and carefully because sooner or later they will be exposed to them, so we are trying to flip the challenge to an opportunity to give them a little bit of immunization,” Islam explains. “You need to keep the discussion going,” “we need to prepare the coming generation on how to balance between being […] a model American and a model Muslim.”

…Want to read more about it? Wait for our next feature discussing the other alternatives of homeschooling and charter schools.