In 2015, Chaudry became the first Muslim appointed to the Maryland State Advisory Committee to the US Commission on Civil Rights – an independent, bipartisan agency established by Congress in 1957 that advises the President and Congress on civil rights matters.

Chaudry was a ‘Nominated Changemaker’ at the 2016 White House Summit on the United State of Women. In the same year, she was recognized as one of the Baltimore Sun’s 25 ‘Women to Watch’.

In 2014, Chaudry trained at the American Muslim Civic Leadership Institute Regional Program and at the Maryland Public Policy Conflict Resolution Fellowship at the University of Maryland School of Law in 2016.

“I think being a woman in this society, there’s kind of this perception of how a woman should be, like what makes a woman attractive or what makes her acceptable,” she said.

“I’ve always wanted to break those molds and realign what society’s perception is of what a woman should be, what makes us attractive or what makes us special or unique or powerful.” 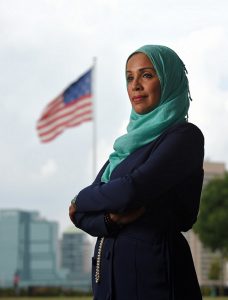 The professor of pharmacy was a former board member of Interfaith Action for Human Rights, and serves as its liaison to Shoulder-to-Shoulder; an interfaith campaign founded to counter anti-Muslim bigotry in America.

She serves on the Advisory Board of Tarbiyah Academy, a Muslim leadership school that is the first International Baccalaureate Islamic primary school in the Washington, D.C., Maryland, Virginia region.

She is a former Task Force member of the Bilal Initiative, which was launched to expand conversations within American Muslim communities on building a multiracial, multigenerational, and women-friendly society.

Chaudry is co-founder and Steering Committee Member of United for Muslim Mental Advocacy and Health (UMMAH) – an initiative launched in conjunction with Maryland area activists and mental health experts to address the mental health crisis and youth suicides plaguing the state’s Muslim communities.

The Muslim American woman has extensively been involved in interfaith initiatives, particularly Jewish-Muslim interfaith dialogue groups. She has been recognized by the Governor of Maryland for organizing the state’s first Muslim Youth Leadership Symposium.

This year, Chaudry was nominated for the El-Hibri Foundation Peace Awards. She has completed emergency preparedness training from the US Department of Homeland Security/FEMA and was recognized for her community work with an Honorable Mention in FEMA’s ‘Individual and Community Preparedness’ awards.