Haneen Jaber, who will turn 18 this October, fills out a voter registration form during an event run as a part of National Muslim Voter Registration Day on Aug. 23. (Photo: Joe Rondone)
aaa

On a Friday afternoon after prayers, 17-year-old Haneen Jaber filled out a form on the patio of the Muslim Society of Memphis.

About to turn 18, Jaber was registering to vote.

“A lot of the things that are going on in the government are made by the decision of the people,” Jaber, told Commercial Appeal.

“Don’t just stay in the back. Be up there in the front. That’s what you should do as an American. I believe I should put my part in and decide on good choices for America.”

Jaber was one of many Muslims around the country registering to vote as part of National Muslim Voter Registration Day. 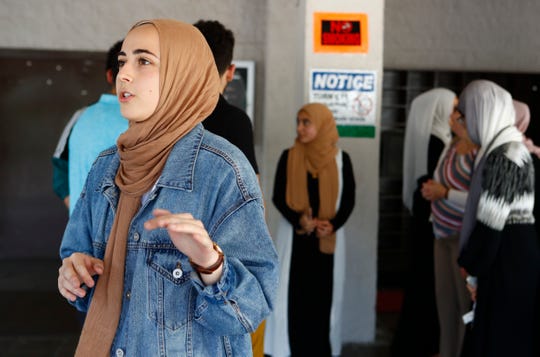 Mariam Khayata, a sophomore at Rhodes College, talks about the effort to reach potential voters as she volunteers during a registration drive. The drive was part of a National Muslim Voter Registration Day event held at the Muslim Society of Memphis on Aug. 23. (Photo: Joe Rondone)

In Memphis, the American Muslim Advisory Council is holding registration drives at five area mosques, trying to increase civic engagement before the municipal elections in October.

The National Muslim Voter Registration Day is part of the #MyMuslimVote campaign, also taking place across the country.

The group planned to register people to vote in the Oct. 3 Memphis municipal election, but that could also act as a springboard for the 2020 presidential elections.

“This is our country, we have our rights to vote and we need to take advantage of them just like every other faith group or every other ethnicity does here,” Mariam Khayata, political science and international studies major at Rhodes College, said.

“Partly yes, it’s because of the political climate and because we’re portrayed negatively in the media, but it’s even more than that. It’s us realizing we have this right and we need to take it.”

They estimate that there are around 17,000 Muslims in Memphis and around 40,000 statewide.

American Muslims have been getting increasingly involved in politics over the past decades.

For now, more than 66% of Muslims identify as Democrats compared to only 13% who identify as Republicans.

In 2018, the Muslim blue wave kicked off when nearly 100 American Muslims, mostly all Democrats, ran for public office.