Chicago-based self-defense instructor Zaineb Abdulla is teaching Muslim women how to defend themselves against would-be attackers. | Roula Allouch, board chair of CAIR, left, speaking during a news conference regarding an earlier attack at the Ohio State University campus, Monday, Nov. 28, 2016, in Dublin, Ohio.
aaa

CAIRO – Videos teaching Muslim women how to respond to hate attacks and trials to grab their hijab have gone viral over the past weeks, as the religious minority experiences a record number of assaults since 9/11.

“In the current social climate, self defense is becoming even more important for women, people with disabilities and visible minorities,” Chicago-based self-defense instructor Zaineb Abdulla told The Huffington Post.

“Muslim women often walk with a target on our heads ― the hijab is such a powerful symbol, it’s easy for bigots to spot us and attack.”

The number of reported assaults against Muslim Americans has reached a record high since after Sept. 11. Muslim women wearing hijab are often some of the most visible, with regard to their faith, making them vulnerable to such attacks.

After  the announcement of Trump’s winning the US  presidential election, Abdulla said she has started the program of teaching women how to protect themselves from would-be attackers.

“In this new era of yelling insults and ripping off hijabs, my community’s first instinct was fear. Our second instinct was action,” she wrote in an op-ed for Middle East Eye. 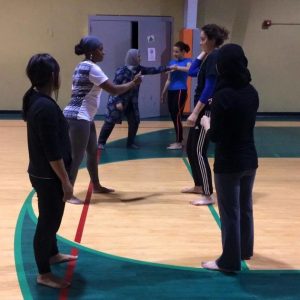 Women participate in a self-defense class at Deaf Planet Soul.

Abdulla posted the two videos on her Facebook page on Nov. 15, guiding Muslim women through simple maneuvers to defend themselves against a “hijab grab” from the front or back.

Both videos are narrated to explain the techniques, and Abdulla provides American Sign Language translation.

The non-profit project held its first two-hour Hate Crime Survival Seminar the Sunday after the election, with a mixture of Muslim and non-Muslim women present.

“When we first launched these classes, we actually designed them to be specifically inclusive of the deaf, which is why we were always sure to teach in ASL and have all information visually accessible,” she said.

“It was such a wonderful safe space where women were able to open up,” she told HuffPost.

Following the viral success of the “Hijab Grab” videos, Abdulla posted another video on Facebook on Friday inviting the public to donate to Deaf Planet Soul so she and other instructors can continue developing their self-defense programs.

“These classes are only possible through the generosity of our community,” Abdulla told HuffPost.

“Our self defense classes and Hate Crime Survival Seminars are designed to give women the tools they need to stand up and fight back. By working to increase self esteem and self confidence in addition to basic self defense knowledge, we are strengthening women in body, mind and spirit.”

“In a world of responding with fear,” she added, “we’re choosing to fight back.”