ANAHEIM, California – Opening their doors and hearts to visitors from all faiths, Muslims in Orange County, California, opened scores of mosques on October 23, as part of events marking the National Open Mosque Day.

“Islam has become politicized – especially during this election,” Mustafa Umar, Imam at the Islamic Institute of Orange County, told The Orange County Register.

“With all of this Islamophobic rhetoric, this anti-Muslim bigotry that’s taking place, hate crimes happening around the country against Muslims, it’s very important for people to understand who Muslims are and what Islam represents.”

First started by the Shura Council of Southern California, an umbrella organization of mosques and other Muslim organizations, Open Mosque Day serves as an opportunity for people of different faiths to be introduced to Islam and Muslim culture.

For this 14th annual event, 26 mosques in Orange County opened their doors – a small slice of about 500 participating mosques nationwide.

More than 50 visitors appeared at the doors of the Islamic Institute of Orange County, where they were able to take a tour, participate in a Q&A session, observe an afternoon prayer and learn about Islam.

During the event, visitors had a chance to clear misconceptions about Islam and Muslims through conversation.

Imam Umar said that direct interaction between Muslims and their neighbors is easily capable of clearing water between them.

“Once they make it in, they realize – hey, Muslims smile! They speak English! These are just regular people, they’re friendly and they’re nice,” Umar said.

“I think there’s a lot of ignorance about Islam. People just don’t know about the religion, but a lot think they know.” 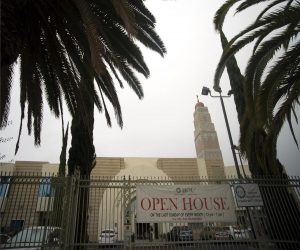 Though October 23 event was the national Open Mosque Day, the Islamic Institute of Orange County never truly closes to the public.

The mosque has an open house at the end of every month, and guests are welcome to schedule tours or just come and talk whenever they wish as part of ongoing efforts to reach out to the community.

“For us, outreach is huge. It’s part of a Muslim’s daily life to make sure they do outreach in a beautiful way,” said Jamaal Zaheen, director of outreach at the institute.

“We’re very small in number here in the United States, yet you find us in the media all over the place – usually in a pejorative way. That’s the .001, but they don’t show you the 99.999 percent of people.”

Carlos Messerschmidt, a Costa Mesa resident, is one of many neighbors who attended Sunday’s open house.

“I have my stereotypes too, but I know that if I’m within the presence of people who belong to a different faith, I don’t believe we’re that different. We just have different rules or ways of following within our faith,” Messerschmidt said.

“They (Muslims) do not appear like how they are being described in the media. My perception of these people here is real, not at all like the picture you get from the media.”