More and more Americans are reacting to the stunning election of Donald Trump in ways that are being dubbed as the ‘Trump effect.’ Far from being just negative, there have been many positive indications that the nation is tapping into a higher state of consciousness.

One such indication came with the recent announcement of an unforeseen alliance between two major organizations after the Islamic Society of North America or ISNA teamed up with the American Jewish Committee to form a national organization called the Muslim Jewish Advisory Council.

The council members include religion and lay leaders from both communities and is committed to addressing the anti-Muslim and anti- Jewish hatred that has been proliferating since the US presidential campaign started.

This latest announcement came at the heels of Trump’s most recent statement appointing Stephen Bannon to the position of chief strategist and senior counselor to the White House.

Bannon was the executive chairman of the far-right website Breitbart News, known for its vitriolic speech.  Bannon himself has been branded as a white nationalist by every prominent organization including the Anti-Defamation League (ADL) and the Council on American Islamic Relations (CAIR).

The National Council of Jewish women strongly criticized the appointment by issuing the following statement which echoed the sentiments of most media coverage about Bannon.

“NCJW is utterly appalled by President-elect Donald Trump’s decision to appoint Stephen Bannon as chief strategist in his administration. As former chairman of the ‘alt-right’ web outlet Breitbart News, Bannon has made his white-supremacist, racist, anti-Semitic, and anti-Muslim views widely known. Upon joining the Trump campaign, Bannon roused a large portion of Trump’s base with a hateful mix of conspiracy theories, bigotry, misogyny, racism, and homophobia.

“If President-elect Trump truly wants to bring together his supporters with the majority of the country that voted against him — by a margin that is nearing two million people, Bannon and his ilk must be barred from his administration. This appointment requires no Senate confirmation. It is up to the president-elect to show leadership for all Americans by reversing this dreadful decision immediately.” 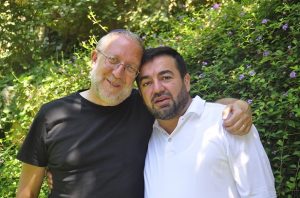 The collaborative effort between Muslims and Jews, although growing, is not a new phenomenon.

Long before Trump even hit the campaign trail, grassroots organizations, like the Sisterhood of Salaam Shalom, have been operating to combat anti-Muslim and anti-Jewish hatred and to advance the cause of religious minorities.

They, along with many other interfaith groups are rapidly expanding in response to the increasing bigotry towards Muslims, Jews and other minorities.

It has become apparent to a great number of Muslim organizations that the American Muslim and Jewish communities share many common interests.  And in spite of the political tensions that sometimes arises, the desire towards peace and reconciliation are more pronounced than ever.

Author and fellow at the Institute for Social Policy, Haroon Moghul, expressed a common sentiment when he wrote:

“… recent events have validated the need to really, really reach out to potential and current allies and challenge ourselves in so doing. As a sign of how far we’ve come, ISNA, the largest North American Muslim organization, and AJC, have launched a Muslim-Jewish advisory council. I wish this effort every success.”

The newly formed Muslim -Jewish Council’s action items include; highlighting the contributions of Muslims and Jews to American Society and celebrating their contributions to the best traditions of American democracy.

The Council will also develop a coordinated strategy to address Muslim bigotry and anti-Semitism in the US, as well as work to protect and expand the rights of religious minorities in the America.

The hope is that by doing so, we may all continue to practice our faith in full freedom and security,  just the way the  founding fathers intended.