The first national political gathering of Muslim in the US history kicked off on Tuesday, July 23, sending an outcry against racism and Islamophobia and calling on Muslims to become beacons of civic participation, Al-Jazeera reported.

“We want to establish a national infrastructure for organizing American Muslims,” said Ghazala Salam, the founder, and president of the Muslim Caucus, describing the event as an opportunity for Muslims to begin building stronger networks for political organizing.

The two-day Muslim Collective for Equitable Democracy 2019 was organized by the Muslim Caucus.

The conference comes a few days after racist attacks on four minority congresswomen, including Ilhan Omar and Rashida Tlaib, the first two Muslim women in Congress.

Though the event was intended to inspire political involvement from the American Muslim community, US President Donald Trump’s repeated legislative and rhetorical attacks on Muslim citizens and immigrants received intense focus from event speakers.

“There’s no sideline to be on because this is no game,” said Congresswoman Betty McCollum as she accepted a human rights award from the Muslim Caucus.

“As Muslims, you have been under attack since day one of this administration. We need to stand in solidarity and common purpose,” she said. 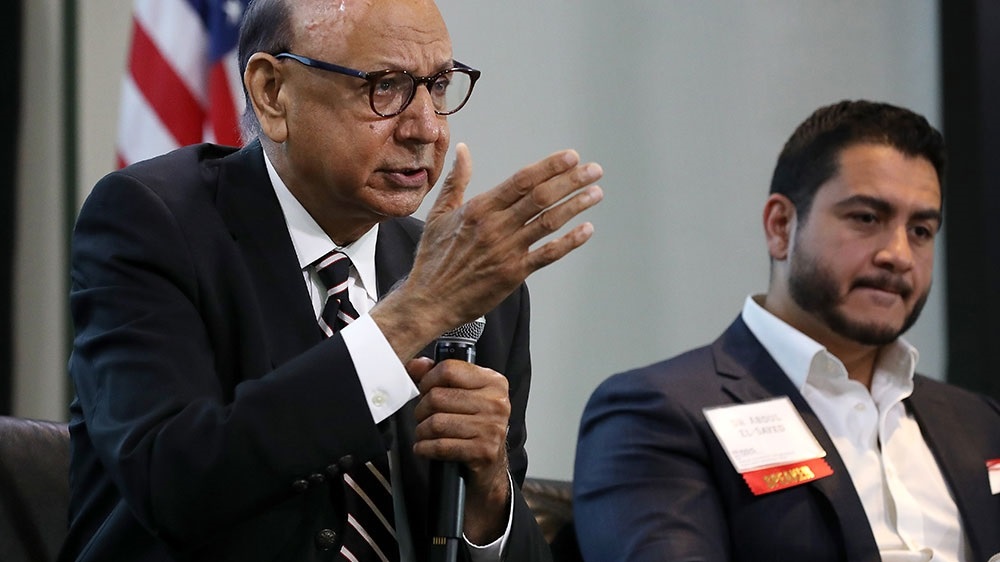 Omar received a standing ovation from attendees, with most speakers declaring their solidarity with the representative, who has become a target for the ire of Trump and his supporters.

“When we are talking about the president, people will say his remarks are racist and forget the inherent racism that has always been part of him,” Omar said.

“We forget the system of oppression that continues to build and … vilify so many of us to almost eliminate our existence in many aspects of society,” she added.

“At least for me, it’s not going to distract me, but I’m going to unmask it. If we don’t push people we’re going to be stuck here for another generation or two.”

Minnesota Attorney General Kieth Ellison, who was the first Muslim elected to Congress, said Muslim American legislators should pursue an agenda that includes calling for a Muslim day at each statehouse, voter tabling in Muslim community centers and persuading imams to celebrate political participation as a Muslim virtue.

“There is no universal unity,” he said. “To some, you are the problem. Find the people who agree with you; you need 50 percent of the people in the room and one more, then you’ve won.”

American Muslims have been getting increasingly involved in politics recently.

For now, more than 66% of Muslims identify as Democrats compared to only 13% who identify as Republicans.

In 2018, the Muslim blue wave kicked off when nearly 100 American Muslims, mostly all Democrats, ran for public office.