NEW YORK – The Muslim population in the United States contains a complex and diverse array of races, ethnicities, and backgrounds, which makes it important for Muslim communities throughout the country to develop and maintain lines of support and solidarity for multiple endeavors to resist injustice.

Recently, a delegation of Indigenous Muslims and their coreligionists of varying backgrounds brought ZamZam water to the Standing Rock Reservation in South Dakota as a display of support and solidarity.

The Muslim delegation joined over 280 Native American tribes from various locations, including Hawaii, South America, and Central America to cease the building of the Dakota Access oil pipeline.

Water Protectors assert that the pipeline will encroach upon sacred indigenous lands and threaten the water supply of the Standing Rock Sioux Reservation.

The Muslim activist organizations, Muslim Anti-Racism Collaborative (MuslimARC) and MPower Change, launched a collective initiative with Indigenous Muslims to raise over $13,000 for provisions like food, blankets, propane, and water.

“When I saw what was happening, I felt a moral obligation to do something. Our anti-racism work has been incomplete because we have done little work to raise awareness about the issues that affect the indigenous people of this land,” he said.

“I know firsthand the generational trauma and high suicide rate due to the systemic racism and loss of culture Native people face. Our history is intertwined and this country was founded on the theft of indigenous lands and enslavement of Africans.” 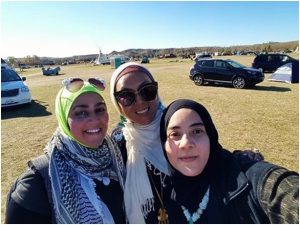 Aziza-Hill also noted the history of solidarity between African Americans and indigenous people, including Black Muslims.

“African slaves escaped slavery by going to Native American communities.  My Black Seminole background is part of that history. Black Muslim groups like the Nation of Islam also established lines of solidarity with indigenous people, so the history is quite extensive,” she said.

LaTanya Barlow, an indigenous Muslim of Diné & Chiricahua-Apache descent, draws a critical relationship between the #SupportStandingRock, #NoDAPL, #SacredStoneCamp, and the global water crisis.

“Standing Rock relates to the global water crisis in that all of God’s creation is comprised of water,” Barlow told AboutIslam.net.

“Indigenous communities across the globe have always been at the forefront in addressing the environmental devastation. The fight for clean water rages on from Turtle Island’s Pacific Northwest to Flint, MI to the Ecuadorian Jungles and from Somalia to Syria and Palestine.”

Spanish-speaking Indigenous Muslim of the K’iche’/ Maya people of Guatemala Leslie Henderson-Oajaca stressed the importance of Muslim involvement in protecting natural resources and the earth.

“It is important for Muslims, in particular, to get involved because it is a basic Islamic principle to protect the earth.  Allah (SWT) has made us keepers and protectors of this planet,” Henderson-Oajaca said.

“There are countless examples in the Quran and Hadith of respect and compassion for nature and the planet as a whole. This Idea that somehow we need to be labeled humanitarians or activists or water protectors to love the planet and the life in it is preposterous. We are Muslims; we come from a long line of “environmentalists.” 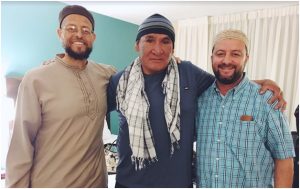 Lakota Sioux Muslim Louis Butcher Jr. aka Brother Basheer, served as an ambassador between the delegation and the Standing Rock chiefs.

During the Reflections on Standing Rock live stream, hosted by the Muslim Anti-Racism Collaborative, Imam Zaid Shakir described the experience of the Muslims at the Sacred Stone Camp.

Shakir further explained the importance of non-Indigenous Muslims to join their Indigenous Muslim coreligionists in forming lines of solidarity regarding water protection.

“It is important for Muslims to be here for a number of reasons. Number one, there are native Muslims. The sovereign rights of the people have been trampled on, and there is a threat to the most fundamental source of life, which is water.”

Imam Taha Hassane expressed the need for Muslims to become more informed and raise awareness about the issues adversely affecting the lives of Indigenous Americans and native peoples globally.

“I believe that it is time for our religious leaders in the Muslim communities to wake up, to learn, to know about what’s going on and to talk about these issues in their Friday khutbah to their community members, and try to give them an example of this struggle because we are all together,” imam Hassane said.

“What our brothers and sisters here are facing is also what our community is facing every single day.”