CHICAGO – Severely impacted for years by rising and alarming strains of Islamophobia, Muslims gathering at the Islamic Society of North America (ISNA) 53rd annual convention have weighed up the phenomenon, defining its roots and trying to find solutions.

Islamophobia, as defined by many, is a xenophobic movement that seeks to demonize Muslims and to tokenize them as villains in their respective communities.

Throughout two sessions, held on Saturday, September 3, the weight of the issue was heavily discussed by both the El-Hibri foundation and later in the day by a group of panelists who sought to define the roots of this phenomenon, as well as how to combat it.

Towards the beginning of the first session, Farhan Latif, the president of the El-Hibri Foundation, spoke to the significance of collective effort and the ability to gather several organizations from different communities to collaborate for the greater good.

El-Hibri foundation, at its core, is an organization that fashions itself as an “Incubator for collective action”.

Farhan spoke of the immense efforts put together by anti-Muslim organizations over the course of the years, and the significant funds put up to directly demonize Islam and Muslims worldwide.

“Up to $42 million was spent in recent years in an effort to malign and create a dangerous narrative around Islam,” he told attendants.

Despite the horrifying effects that such propaganda could have on society, as indicated by the rise of Anti-Muslim attacks and even armed protests against mosques, Farhan spoke to the beauty of collective action to be able to achieve a great positive effort.

The diversity and depth of several Muslim organizations are often heralded by their members as impactful organizations, and, to a large degree, they are.

However, many organizations seem to work toward similar goals and can often hinder each other’s efforts by not closely collaborating and coordinating individual goals that seek to: “push the needle towards achieving a complex social problem”. 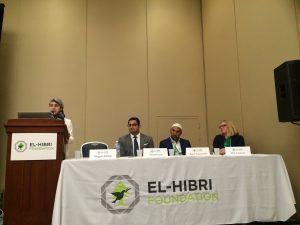 According to Farhan, El Hibri foundation seeks to alleviate this issue and to empower and harness the powers of these organizations to achieve a greater goal.

The series of Panelists at the first session also delved into the individual programs that emphasized the impact of cross-organizational organizations.

The media arm of El Hibri foundation, known as Rethink media, spearheaded several social media campaigns to change the narrative against Muslims by thoughtful and catchy hashtags on Twitter, among the successful ones being #IStandWithAhmad and #NotmyAmerica.

These hashtags have had resounding success and the audience was further intrigued by the impactful efforts of this organization. 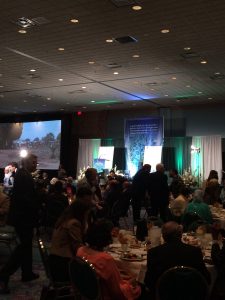 The second session dedicated to Islamophobia outlined the very roots and causes of Islamophobia; both on a sociological and political level.

The panelists consisted of the likes of John Esposito, Dalia Mogahed and Imam Dawud Walid. Each of them shared their deep concern with the rise of Islamophobia and explained the broader attitudes toward Islam as a whole in the past few years.

John started off by explaining the very “embedded mentality that demonized Muslims in a rampant way throughout the country”.

“There is a consistent fear, among many Americans today, that a religious and observant Muslim by definition is an individual that can potentially lean towards extremism”.

Institutional Islamophobia, she believed, was practiced at a governmental level and treated the Muslim community in many occasions as a “pool of suspects rather than American citizens” she indicated, through several racist public policies.

The second type of Islamophobia, on an individual level, was defined by public sentiment around Muslims as a whole. She insisted that “both methods fed off of each other”, as governmental support of such policies would not survive without Public consent, and the fact that government policies were being enforced against Muslims made them subject to scrutiny and fear.

Imam Dawud then picked up the conversation and explained that Islamophobia as a whole was merely a branch upon the tree of institutional racism that in many ways defines this country.

The rest of the session was characterized by questions posed to the panelists on the several ways one must deal with Islamophobia in Muslim communities, but also the efforts needed to combat it.

All three panelists stayed consistent with the message that requires Muslims to not only practice their faith in a positive way but to be intimately familiar with the tenants of their faith to properly communicate it to the American public.

Furthermore, every panelist spoke consistently about employing media to the community’s advantage and to be able to use our efforts to cohesively develop and maintain relationships with natural allies in several other Faith based and minority communities.

In conclusion, the two sessions illuminated on a deeply divisive issue that affects every Muslim today.

The message conveyed was to be consistent with one’s faith and to not apologize or compromise for external criterion set for Muslims. The ability to stand up in the face of injustice and to have a heavily concerted effort and resounding voice that spoke against Islamophobia was the very key to success.