NEW YORK – School officials have fired substitute teacher Oghenetega Edah for threatening to and then ripping off the hijab of 8-year-old student Safa Alzockary, as the incident triggered wide condemnations and reactions from US Muslims.

“I do a lot of work with schools as the director of the safe spaces program at CAIR-MI [the Michigan branch of the Council on American Islamic Relations] to ensure that schools are safe zones for students,” Asha Noor, a racial justice and human rights activist, told AboutIslam.net.

“We’ve seen an increase in violence and aggression against Muslim youth, and it’s particularly salient when enacted by those meant to protect them.”

According to reports, Edah, 31, commanded Alzockary to remove her hijab. When the student refused, the teacher ripped the religious head covering from her head, causing injury to her right eye.

Alzokary recounted the alleged assault in an interview with WPIX news station.

“He said, ‘I want to see your hair.’ I thought he was joking. I said, ‘You can’t because if you did, I will tell the principal.’ And then he just started laughing and took it off. And then I fixed it, and I was holding it. And then so he took it off again, so we ran out of class.”

The New York City Dept. of Education issued a statement to condemn the incident.

“This alleged behavior is completely unacceptable. This individual was removed from the school immediately, and his employment has been terminated,” it read.

Alzokary was traumatized by the event. “I was so mad like…you don’t know how I was feeling. I was going to cry so bad – and I was crying.”

Modest dress is practiced by women of other faiths, including Christianity and Judaism. However, there has been a trend targeting covered Muslim women and girls.

With the intense anti-Muslim sentiment across the country, there is an increased need for Muslims to remain vigilant in trying to keep women and girls and all Muslim students safe.

Sahar Pirzada, programs and outreach manager at HEART Women & Girls, told AboutIslam that she has heard of comparable incidents.

“I worked with youth in Southern California who shared similar experiences with me about teachers reacting negatively and showing them hostility for wearing hijab,” she said.

“One student even had her hijab ripped off and was somehow sent to the principal’s office, where she was disciplined. It makes me so upset to see how the children in our community are being bullied for exercising their first amendment right to practice their religion. I definitely think there is an element of gendered Islamophobia here in these cases.”

Because a foundational role of educators is to protect those under one’s tutelage and maintain control in the learning environment, Oghenetega Edah’s behavior towards his pupil shocked Muslim American educators.

“As a former classroom teacher and as a mom, this case was deeply disturbing,” Margari Hill,  co-founder at MuslimARC, told AboutIslam.

“Teachers, as well as all adults, must respect the bodily autonomy of children. They have no right to remove any item of clothing.”

“In addition to training teachers for cultural sensitivity, it is important for policies to be put in place to protect our children from bias,” she said.

Muslim parents and community members were equally dismayed by the idea that a teacher would violate a trust to educate and protect students. Many dismiss the implication that the instructor’s behavior is somehow justifiable because of reports that the student was misbehaving. 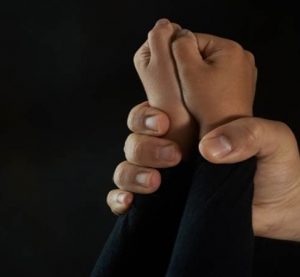 “This teacher choosing to discipline a young Muslim student by pulling off her hijab is doubly traumatizing, from a violence perspective and a faith one,” said Dilshad Ali, managing editor of the Muslim Portal at Patheos.

“I get that she needed some consequence or discipline for not following the teacher’s rules and not listening to her teacher — but this wasn’t the way.”

“This young child’s behavior is not the issue as to whether or not this teacher reacted appropriately,” said domestic violence advocate Sahar Abdulaziz.

“To do so is not only disingenuous but dangerous precisely because it is a way to diffuse, deflect, or justify the outrageous and criminal behavior of this educator.

American Muslims conveyed their angst knowing that susceptible young students can be potential targets of religious aggression by the very people responsible for safeguarding them.

“If a person in authority, a teacher or substitute teacher can act in this manner, it makes me wary about the general public,” Noor told AboutIslam. “I grew up respecting teachers and viewing them as authority figures in my life, To know a child is violated, in an already vulnerable situation, is unsettling.”

“As a teacher, he is mandated and entrusted to create and support a safe learning environment for all of his students, not a select few,” Abdulaziz told About Islam.

“Instead, this particular teacher capitalized on his position of power and control by misusing that authority to escalate a student-teacher disturbance. His lack of professionalism and open hostility towards Islam was on full display the very moment he decided to target the child’s hijab specifically.”

Being a Covered Muslimah

The alleged assault highlights a reality for numerous Muslim women and girls across the nation desiring to maintain their convictions and dress in accordance to religious commandments that their personality and humanity are under constant peril by individuals and groups antagonized by their presence.

“With hate crimes on the rise (as tracked by the Southern Poverty Law Center) and bullying in schools among students, being a young Muslim women in America is stressful enough these days,” said Ali.

“This particular situation serves to highlight the precarious position Muslim women and girls are susceptible to–merely because we exist,” Abdulaziz explained to AboutIslam.

“The systemic racism and brazenly open toxic masculinity that supports such subjugation strips Muslim women and girls of our inalienable right to lead safe lives, free from discrimination and condemnation.”

“Furthermore, this mindset woefully and purposefully targets Muslim women and girls because to them; the hijab is symbolic of all that they hate and fear.”