HOUSTON – On Jan. 20 Donald Trump will be sworn in as the 45th president of the United States. That reality has created an uncomfortable, and even fearful, situation for some young Muslims around the country.

Although there’s nothing they can do to prevent Trump’s impending presidency, there are ways Muslim children can gain control over their feelings about the president-elect and channel them into positive tools to cope and thrive in a changing America.

Amin Aaser, founder of Noor Kids children’s books, told AboutIslam.net that encouraging kids to speak out about their feelings and their opinions is a powerful way for them to not only affect change, but to exert some measure of control over what may seem like uncontrollable circumstances.

To help kids do just that, Aaser and Noor Kids launched a letter-writing campaign encouraging little Muslims to write to the future president telling him how they feel he should act as the head of our country’s government. They were also encouraged to share any worries or concerns they had.

“The impetus behind this was to show Muslim kids that this country is as much theirs as it is anyone else’s,” Aaser told AboutIslam.net.

“Children at a young age will begin to feel like they actually have a voice and they can express it and all they have to do is pick up a pen and paper and share it.”

Aaser said more than 50 children took part in the activity, and the fears they expressed were telling.

A 12-year-old girl from California worried about how Muslims would be treated in America.

An eight-year-old youngster, also from California, wanted to explain that Muslims aren’t mean like many people think and worried her father would be kicked out of the country.

The surprising election of Donald Trump, who suggested banning Muslims from entering the US, as America’s 45th president is having its negative impact on American Muslims.

According to the Southern Poverty Law Center, there were more than 200 incidents of harassment and intimidation in the first days after Trump’s election. Many were directed toward African Americans, immigrants, Muslims and the LGBT community. 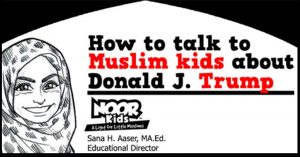 Aaser said having children write these letters is key to helping them deal with scary circumstances. He said parents should then follow up with their children and address their concerns.

“Kids fear what they don’t know so talk to your kids about the political process and explain to them what the president can and can’t do,” he said.

“A key thing to remember and tell kids is that although Trump won the election more than half the country voted against him, and also that just because someone voted for him doesn’t mean they agree with everything he said.”

Aaser said it’s also important for parents to question their children about their feelings on the election, but also to make sure and give them plenty of space to answer truthfully and authentically.

“Don’t push your attitudes onto your kids, start with open-ended questions. Ask them how they feel about the election and if there’s anything they’re happy or sad about,” he advised.

Psychologists around the country agree.

Dr. Gene Beresin works at Massachusetts General Hospital as the director of the Clay Center for Young Healthy Minds. He wrote about a colleague’s daughter who was scared she’d be forced to leave the country because she has brown skin.

Considering Trump’s harsh campaign rhetoric against Mexican immigrants and Muslims, it is no wonder a small child would be fearful of what a Trump presidency could mean for her future in America.

For Muslim children experiencing similar worries, Dr. Beresin counsels parents to explain to kids that oftentimes people are afraid of others who they consider different because they don’t know them, not because they think they are bad.

Some child psychology experts echo Aaser’s suggestions that encouraging children to become advocates for themselves and for others is a way to build confidence in themselves and their place in America, either as immigrants or citizens.

They also emphasize volunteering and building empathy for people as a healthy way to fight back against the uglier sides of society.

Others warn against what not to say, urging parents not to focus on whether or not kids are scared, but instead aim at getting to the heart of what their kids and even their kids’ friends think about or have been hearing about Trump’s impending presidency.

Kim Arrington, clinical director of Harlem Family Institute in New York City, wrote that parents should not be hesitant to accurately share their own feelings about the election with the little ones in their lives.

She said if you’re angry, express it, because it’s a normal emotion and one young children may be feeling as well. However, Arrington cautioned parents to be in control of their anger, especially when demonstrating it to their kids.

This way, children have a positive example for how to express their feelings, even if they aren’t pleasant.