LOS ANGELES – A group of all-Muslim female team has won Los Angeles First Lego League robotics competition, making their own statement against stereotyping Muslim women and painting a better picture for their community.

“I know I can try to change things gradually by doing this robotics program,” Zaina Siyed told Los Angeles Times on Monday, November 28.

“It’s time for us to focus on … presenting ourselves in the best light.”

The competition allows young people between the ages of 9 and 14 to put themselves in the shoes of scientists and apply math and science concepts to real-world issues while demonstrating teamwork and problem solving.

Zaina’s team, FemSTEM, was made up of eight competition rookies, ages 10 to 14.

She had recruited them and raised the money in an online campaign to cover all they would need to compete, including team shirts, registration fees, equipment. 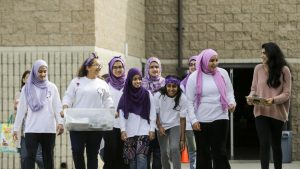 The FemSTEM team walks out of the gym after competing in the First Lego League robotics competition. (Irfan Khan / Los Angeles Times)

“How does a Muslim girl who is passionate about tech encourage her sisters in the Muslim community to embrace the wonderful world of STEM?” she wrote in her pitch for donations, referring to the study of science, technology, engineering and math.

Zaina said she knew of no other all-girl Muslim team that had competed in a First Lego League event in the US.

“It’s a burden for us to make sure we’re always on our best behavior.”

Zaina said she wanted the world to know that Muslim girls can be strong, intelligent, successful career women, whose parents and community support them.

“A spotlight will be shined on this community,” Zaina said.

“We’re ready to work ourselves out of these … negative perceptions.”

After a long day of competition rounds, which exceeded 7 hours, Cindy Muñoz, one of the judges who work on a master’s in cybersecurity, announced the win of the all-girls Muslim team.

“As a woman in STEM … [I’m] proud, hopeful for the next generation,” the judge said.