After a ceremony this summer, Lieutenant Colonel Khallid Shabazz will be the first Muslim division-level chaplain in the history of the U.S. military.

Last month Shabazz received the call every Army chaplain dreams of, the call that validates years of intense study and hard work toward keeping the U.S. military in good spiritual health.

This position means that the 48-year old chaplain will be a Muslim spiritual leader for more than 14,000 mostly Christian soldiers, reported The News Tribune on February 27.

“I’m on the phone saying, ‘Thank you, I appreciate it. I’ll serve honorably,’ and then I hang up the phone and I’m jumping all around like a little kid. I was running around the office saying, al hamdulillah, al hamdulillah, praise be to God!” Shabazz told McClatchyDC.com about the moment when he received the news at his desk on Joint Base Lewis-McChord near Tacoma, Washington.

Like many other chaplains, the native of Alexandria, Virginia has traveled extensively in the combat areas to provide spiritual support to members of his faith, as well as that of other faiths. 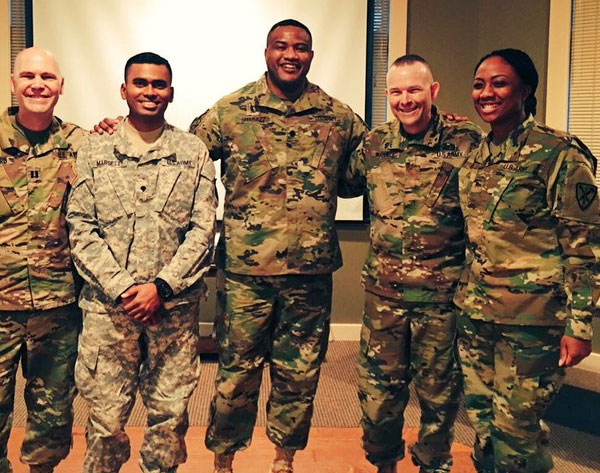 Shabazz deployed numerous times to minister to soldiers in the Balkans including Bosnia and Kosovar Albania, as well as in southwest Asia including Iraq, in addition to Africa and Poland. Besides, he was an adviser of religious affairs for detainees at Guantanamo Bay, Cuba.

He also worked with US Army Europe (USAREUR) stationed in Germany, training local faith leaders to fill-in in the ‘frequent’ absence of an Islamic Chaplain.

“Being able to train and commission faith group leaders throughout USAREUR is an example of how the Army provides the necessary support and resources to meet the spiritual needs of Muslim soldiers,” Shabazz told ChristianFighterPilot.com.

How Did It All Start?

Interestingly, Shabazz was a Lutheran Christian named Michael Barnes. His mother used to take him with the entire family to church three times a week and recited prayers with her children each night.

He has even graduated from Jarvis Christian College before enrolling in the military as an Army field artilleryman in the 7th Infantry Division.

“One day, I challenged a Muslim soldier on the concepts of Islam. I was fascinated by the responses of the Muslim soldier and began a two-year journey of studying Islam, which eventually led to my conversion,” Shabazz informed IslamophobiaToday.com.

Shabazz studied Qur’anic methodology, the hadith (Sayings of Prophet Muhammad PBUH) and comparative religion for 2 years and a half to become an imam at the Graduate School of Islamic and Social Sciences in Ashburn, Virginia. He also studied Arabic for two years at the University of Jordan in Amman, Jordan.

“One of my favorite passages in the Qur’an asks if the man who thinks and the man who does are the same,” Shabazz told McClatchyDC.com. “It’s the thinking component in Islam that really intrigued me. I am in control of my grace, and I don’t have to answer to the imam. I tell my congregation, ‘Listen, you have to do your own research.’ ” 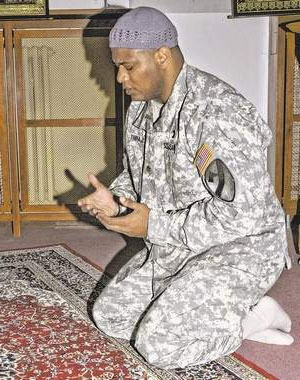 Unsurprisingly, Shabazz’s conversion didn’t play well with his family in Louisiana, where he’s still known as Michael. He informed McClatchyDC.com that it took years for them to accept the change, but now they tease him about praying on time and make him a special gumbo minus the pork sausage. “Such conciliatory gestures must go both ways.”

Shabazz’s switch in faiths didn’t exactly go smoothly with the military, either. He had to write memos for even the smallest religious accommodation, such as time to perform the traditional Friday prayers. He’d fast during the holy month of Ramadan, though his schedule called for grueling work in the field. Ravenous by the end of the day, he’d come to the mess hall only to find pork chops. He’d raise concerns with his superiors from time to time, but made little ground.

“When you have an unknown there, sometimes the leadership kind of treats you unfairly because they’re not educated into what you’re doing,” Shabazz said. “In defense of them, I didn’t explain it very well, either. I was growing. There were some tough days.”

On one of the toughest days, Shabazz was exhausted from a series of 12-hour shifts and hungry because of the lack of pork-free meals. Sitting outside on an M109 howitzer, he felt his frustration spill out in tears. Nobody’s here for me, he thought. Maybe this organization is not for me.

A passing chaplain noticed Shabazz’s distress and stopped. In an hourlong impromptu ministry session, the chaplain let Shabazz pour his heart out about his struggle to carve a space for himself in the military.

After listening, Shabazz said, the chaplain mentioned that the Army had recently received its first active-duty Muslim chaplain: Would that kind of path interest Shabazz? 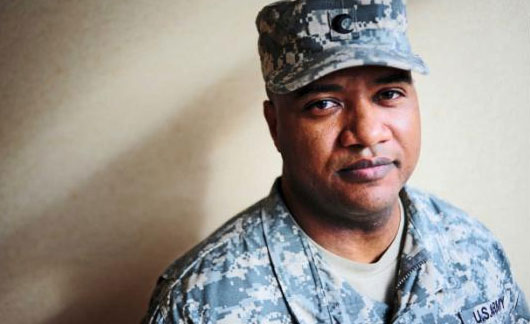 According to McClatchyDC.com, the American Department of Defense counts more than 6,000 self-identified Muslims currently serving, from a total of 1.3 million active-duty and more than 800,000 guard and reserve members. However, the real number of Muslims is thought to be higher because many troops choose not to list a religion, especially if they’re worried about backlash.

Shabazz has previously hosted an Islamic iftar in 2013 with the help of his chaplain assistant, Sergeant Jessica Covello. According to ChristianFighterPilot.com the event was attended by “more than 60 soldiers and family members” at Fort Hood, Texas.

“I went to wherever there was a base camp. If I had one soldier at a base camp in Q-West, I flew there to minister to him and provide whatever I could to him. If they had to put me in a Humvee at 3 in the morning, I went at 3 in the morning. I told commanders what they could and couldn’t do based on the religion,” Shabazz expressed to IslamophobiaToday.com.

“My job is to go to each chapel and make sure I commission distinctive faith group leaders, a person who serves in the absence of the chaplain to conduct service. Everywhere in Europe they have chaplains to do the services. They don’t have imams to do the service, so I have to go in and train a guy. I send in an endorsement for him, and he gets to be the distinctive faith group leader for one year. Then, we retrain him every year,” he continued.

Shabazz said that the Islamic community inside the American army is no different than any other community. “The main objective is to worship. We want great families. We want our children to grow up and be successful. We want to be part of the community as opposed to being on the outside of the community,” he explained.

Speaking about his role to IslamophobiaToday.com, Shabazz clarified that “Every Friday we come here (the Patrick Henry Village Chapel) like any other service. We get together to garner support and be a backdrop of stability for each other. Like any church organization, we want to provide comfort for the people in the mosque and make sure they know that when they’re in times of trouble and difficulty, we’re here for them.”

In parallel with the internationality of Islam, the refuge of the mosque isn’t limited to only Muslim soldiers, and Shabazz is eager to offer guidance and support to all soldiers; “I spend 99.9% of my time ministering to non-Muslim soldiers. I play basketball and lift weights with them. Most of them don’t come to me for spiritual guidance, but they come to me for mentorship. I’ve put 24 soldiers in officer school by helping with their packets,” he explained happily.

“It’s like offering fatherly or brotherly advice which is spiritual to me. In the chaplain corps, we either perform or provide. If I can’t direct them spiritually, I provide another chaplain for their spiritual needs. I’m a chaplain first and imam second. When people call me the Muslim chaplain, I’m almost offended, because that is categorizing me to be only for Muslim soldiers, and that isn’t who I am. I have a moon on my chest. They are going to know that I’m a Muslim. My job, the job of the chaplain, is to take care of soldiers. I’m Chaplain Shabazz who happens to be one of our Muslim chaplains. It’s a play on words to some people, but not to me,” he said.