LONDON – Waking up to another day in Trump’s America, where as a break from the President’s sabre rattling with North Korea, something else I never thought to see in our age, a white supremacist march with fire-lit torches, chanting Nazi slogans, taking place, no less, on a university campus; otherwise the home to education, learning and wisdom the world over.

Commentators across social media, such as Sherry Nelson, an activist, expressed disbelief at the misbalanced response to the Nazi march, “So black people non violently protesting on the sidewalk warrants riot gear but white people with torches doesn’t?”

While others such as Jen Ann Geuse, sought to clarify the labels attached to these protestors, “They’re wearing swastikas down in #Charlottesville but ppl still call them ‘alt-right’ & ‘white nationalists’? The word is N-A-Z-I.”

Contextualizing the hatred, Dr Eugene Gu, President of the Ganogen Research Institute said that “All elective surgery cases including for people with cancer were cancelled at the huge UVA hospital today. Thanks KKK.”

Expressing his frustration he added, “Whites yelling ‘Jew will not replace us’ while carrying torches are pretty much the definition of the KKK #Charlottesville”

Amy Siskind, President of New Adgenda, shared what many believe, when she said, “I don’t want to read one more about the white people who voted for Trump because of jobs. The truth is marching in Charlottesville tonight.” 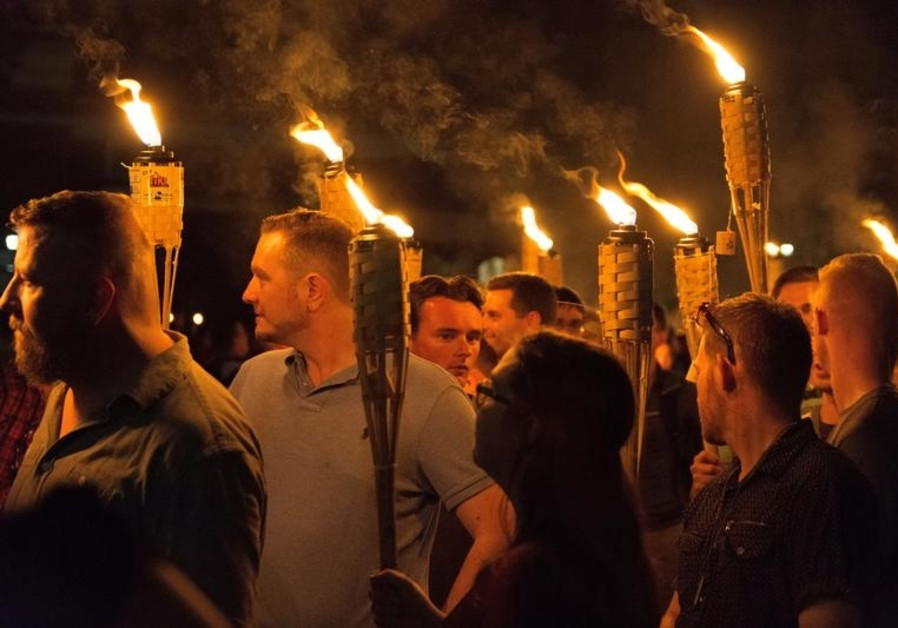 Every day in Trump’s America sees the normalization of hate, a misplaced anger, a fear, a blame, that it is always someone else’s fault as Caroline Murty said, “You’re in a torch wielding angry mob and you don’t realize you’re the baddies?”

As the causes for whatever hardship or difficulty being faced are casually deflected. American Josh Neiman summed it up best, “Whether you want to believe it nor not, what’s happening in #Charlottesville IS the direct result of number 45s rhetoric. He emboldened them.”

There is a significant disconnect, a battle for the heart and soul of America.

Some believe that President Trump’s election means that they can try to continue to normalize racism, misogyny, and all that is unpleasant about the current President.

The flip side however is that not all Americans are bad, nor do all Americans support those who are bad.  Pastor John Pavlovitz, for example, showed the better, wider sentiment, of the proper spirit of the American people:

You can kiss our diverse, unified, multi-coloured behinds.

A theme echoed by Muslim Advocates who Tweeted, “What is happening in Charlottesville is wrong. An attack on one of us is an attack on us all.”

There were of course heroes at the protest last night, other students at the University of Virginia, who held up a sign reading “VA students act against white supremacy.”

In a crowd of hundreds of angry men chanting Nazi slogans, and in the absence of courage or leadership from their President to condemn their behavior, it stood to these brave students who held up that sign, demonstrating that Greatness is indeed already very much a part of America.