TEXAS – A sharply divisive presidential campaign is having its shadows reflected on the American Muslim community, meeting Donald Trump’s win with a mixture of emotions, with some reacting positively and others with great concern.

Ever since, the billionaire businessman from New York has consistently alienated minority groups, refused to release his tax returns and remained seemingly unapologetic for leaked tapes in which he brags about sexually assaulting women.

While most Muslim Americans appeared to have been insulted and turned off by Trump’s offensive remarks against the community, especially when he said he wants to “ban Muslims from coming to the US” should he win the elections, Ahmed argues that Muslim Americans should put that behind them and “stop playing victims”.

Muslims in this country should become “more proactive and have strategic outreach to the Republicans,” she said.

“We cannot afford to remain partisan and support only the Democratic Party.”

Unlike Ahmed, Moussa ElBayoumi, the head of the Council of American Islamic Relations (CAIR) Texas chapter, sees Trump’s win is unsettling due to the anti-Muslim sentiments he expressed during his presidential campaign.

Elbayoumi called on president-elect Trump “to respect the United States constitution and the values upon which it is built”.

Elbayoumi said that if the new president fails to be a president for all Americans, “CAIR would stand ready to defend the civil liberties of all American citizens, including Muslim Americans”. 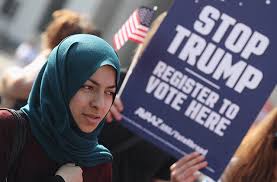 Others Muslims said they see no immediate threats coming from a Trump administration against Muslim or Arab Americans.

“Once you have economic crises in a society, nationalism spikes which then leads to the emergence of populist leaders such as Trump,” said Basil al-Qudwa, who teaches economics at Al Huda University in Houston, Texas.

He argues that Trump’s win is not an anomaly given the economic stagnation in the US over the past decade.

“Trump’s rhetoric has been exaggerated by the media to help Clinton – the quintessential insider – hold on to power,” Hanania said.

He argued that Trump received more support from women, Latinos and blacks than Mitt Romney did in 2012, which shows how deceptive American mainstream media were.

“The bottom line is that Trump’s election is a slap on the face of American media which feeds on anti-Arab, anti-Muslim racism more than Donald Trump ever did.”

Hanania’s optimism about Trump was not shared by fellow Chicagoan Shadin Maali, a well-known social activist.

“How is it possible that here in America in 2016 could a man who has based his campaign on hatred, bigotry and divisiveness win the hearts and minds of so many American people?” she said in disbelief.