TORONTO – Feeling the heat of anti-Muslim rhetoric coming from the southern borders, Canadian Muslim women are creating a new hub for empowerment, with the help of a hijab-wearing martial artist with black belts in karate and taekwondo.

“I haven’t been attacked, but I feel that it might be something that could happen any moment now,” Nafiza Aziz told CBC News on Tuesday, October 19.

Aziz feels anxious about her safety as a Muslim woman due to the language of Donald Trump’s campaign.

She and other Muslims have been experiencing a rise in anti-Muslim attacks recently, including attacks targeting mosques and Islamic centers.

This string of incidents in Canada comes a year after Aziz’s friend, Sundus Ali, also a Muslim woman, was told she “should be raped” and go back to her “own country” on a Toronto transit bus. 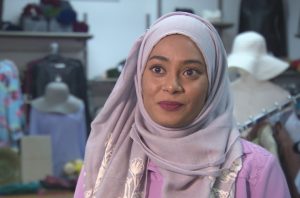 Aziz, owner of Modah, an ‘Islamic lifestyle’ shop in Mississauga, Ont., says she decided to offer self-defence classes at her store because she felt growing anti-Muslim rhetoric in the U.S. could have consequences here at home. (CBC)

Therefore, she decided to take matters into her own hands, transforming her Mississauga “Islamic lifestyle” boutique, Modah, into a hub for Muslim women’s empowerment, with the help of a hijab-wearing martial artist with black belts in karate and taekwondo.

“This happens in our community on a daily basis. It happens to a lot of people who are afraid to come forward,” Ali told CBC News.

She worries the heated rhetoric, specifically Trump’s earlier call to ban Muslims from the US, could have repercussions in Canada.

“This is a man who has an incredible amount of power standing on probably one of the biggest stages in the world making heinous comments about Muslim women and women in general.”

That’s in part why she says the need for self-defense classes is very real.

“I feel like we almost wait for things to get really bad and then we respond to it. And we just can’t let it get to that point.” 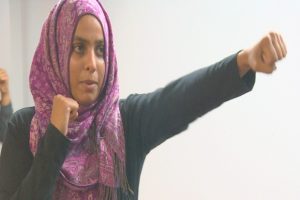 Ryhana Dawood has been teaching self-defence to Muslim women at mosques across the Greater Toronto Area over the past eight years, but says demand has increased considerably over the past year. (CBC)

At the classes, instructor Ryhana Dawood said that demand has increased considerably over the past year.

“A lot of women feel unsafe.… I think a majority of women face issues of sexual assault and sexual harassment,” she said.

The 28-year-old has been teaching self-defence to Muslim women at mosques across the Greater Toronto Area over the past eight years, but says

“But this added pressure and this added fear that’s heaped onto them with how Muslims are being treated lately has been making a lot of women want to come out to these sessions.”

Other instructors are giving similar martial arts classes in Greater Toronto Area, including one at Umma Martial Arts based largely in Etobicoke and Scarborough and at Wen-Do Women’s Self Defence in Toronto.

One of Dawood’s biggest messages to women she teaches is: “Get big and get loud.”

Dawood usually tells her students in classes to find and use women strongest weapon.

“It’s interesting because none of them ever say, ‘Your voice.’ But at the end of the day your voice is your strongest weapon, no matter what situation you’re in,” she said.

Aziz hopes to transfer the message that women should defend themselves against attackers to women of all ages.

“You wouldn’t want your child to think that somebody can come up to them and just attack them out of the blue.”

But knowing what happened to her friend, Aziz says, the possibility is very real. “I don’t think you can sugar-coat it.”

That’s why she and Dawood welcome girls to the classes as young as eight.

“No one felt the need to say anything or step in and take a stand.… So if no one is going to be there and support you, you need to handle the situation somewhat on your own,” she added.