In 1994, Tarek Bin Yameen and his family found themselves internally displaced refugees when the civil work broke out in Yemen. Today he's giving back by with a series of free vision clinics for Syrian refugees whose experience he says he can relate to firsthand. (Laura DaSilva/CBC)
aaa

TORONTO – Once a refugee himself, Tarek Bin Yameen, a second-year medical student at the University of Toronto, has launched free vision clinics to Syrian refugees in Toronto area, paying it forward to keep hope in a better future.

“When I see these newcomers in Canada, when I see the children, they remind me of my own personal experiences that I had as a kid,” Bin Yameen told CBC News on Sunday, November 13.

Bin Yameen spent the first half of his life in Yemen.

As the civil war broke out there in 1994, his family suddenly found themselves internally displaced, moving to a refugee camp.

Within a span of week, a cholera outbreak killed 40 people. Few received the necessary vaccines.

The family moved later to Canada where they started a new life.

Meeting six-year-old Hanaan, whose family arrived in Canada as refugees from Syria, he knew he had to help. 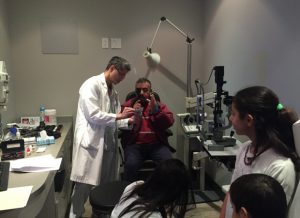 Equipped with translators and specialists, the clinics provide families with an initial eye exam and if they need glasses or a specialist appointments, they get them on the spot. (Laura DaSilva/CBC)

He met the little girl while assisting her privately-sponsored family, and soon realized she was suffering from a condition called strabismus. Untreated, Hanaan could eventually go blind.

“When I thought about that little young girl, I began wondering how many children here have eye conditions that are undiagnosed?”

“Even though they had federal health coverage, they never accessed eye care treatment,” Bin Yameen told CBC Toronto, adding that language and transportation barriers put eye care out of reach for the family.

Hanaan was not the only refugee in need of help.

Gullistan Abdo and her family, who fled Syria for Turkey, then Canada, had a similar problem.

“We could access [medical care], but we had to pay money which we didn’t have,” she told CBC Toronto, speaking in Arabic through a translator. 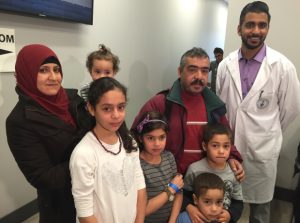 The Abdo family spent four years in Turkey after fleeing Aleppo. The family of seven at one point was homeless in Turkey where medical care was so expensive it was virtually out of reach. (Laura DaSilva/CBC)

This summer, he launched a pilot together with St. Michael’s Hospital and non-profit group Mes Amis.

Equipped with translators and specialists, the clinics provide families with an initial eye exam.

“The Arabic is always a difficult thing for people to find. They can go to the clinics by themselves but they can’t always articulate, you know, what their issues are. So having the translators here has been a really big plus,” Mes Amis executive director Julie Mahfouz told CBC Toronto.

The demand was overwhelming, as a hundred and eighty refugees turned out for eye exams.

Hanaan’s family was lucky after he connected them with a specialist in the US who will perform the young girl’s operation.

But Bin Yameen knows that not everyone shares that good fortune.

“Going to see a doctor is not your major concern.”

Three more eye clinics are scheduled to roll out in the coming months, reaching as far as the Kitchener-Waterloo area.

Examining refugees, Bin Yameen’s memories returned years ago when he was a similar situation.

“This country gave me an opportunity to come here and study here and I’m paying it forward,” he added.