HOUSTON – In the United States the news of Donald Trump’s win came early in the morning and the reactions followed swiftly on social media, many laden with a heavy dose of shock and dismay.

Cries of “How could this happen?”, “What have we become?” and “I’m utterly disgusted right now,” came fast and furious as Muslim Americans expressed their disbelief as one often does in 2016 – on the internet.

On social media, American Muslims described themselves as “sickened,” “terrified,” and “fearful” for the future of their country in the hands of Trump. Many have shed tears. For them, the outlook is bleak.

Even Muslim overseas share in their pain, some even extending the hand of welcome to their American brothers and sisters.

“Time to make hijrah to Muslim lands,” wrote one.

Indeed the 2016 American presidential election between Republican Trump and Hillary Clinton, a Democrat, has struck a dark and often fearful tone and left millions of American Muslims shaken not only with the outcome but throughout the entirety of the campaign.

Still, some say, given the divisive rhetoric of the past year and a half, Trump’s election isn’t entirely unexpected.

“Even now, seeing what everyone is posting on social media and how everyone is upset saying how could we have let someone like this win, I’m not really in shock,” school teacher Amanda Zaidan told AboutIslam.net.

“After interacting with people (during the course of the campaign) and hearing what they have to say, I’m not really surprised. Plus, there was a lot of negativity towards Hillary.”

Zaidan is correct. This election has been nothing if not a magnification of how deeply ideologically divided the United States is. 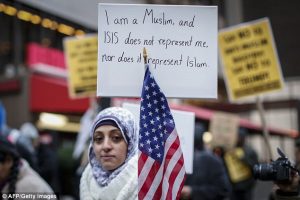 No one can deny the race was tight and Trump’s win, though absolute, was by a razor-thin margin in terms of the popular vote, which Clinton won. However, it was her loss in the Electoral College with 218 votes to Trump’s 289, that sealed her fate.

That fate, some say, lay in her gender. In fact, Zaidan said the election is further proof that “even though it’s the 21st century it’s still a male-dominated world, and the US government is not ready for a woman president.”

“She lost because she’s a woman,” he said. “Plain and simple.”

But lose she did and American Muslims and everyone who lent her their support must now look ahead and figure out what a Trump presidency means.

For Zaidan, she said her priorities fall close to home.

She also had a bit of hope for the future and urged those in the losing camp to move forward despite many of Trump’s controversial and troubling campaign promises.

“I feel like a lot of what he said about banning Muslims and building the wall (on the United States-Mexico border) he said to get people hyped up, to get them to vote for him, and it worked,” Zaidan said.

“But in reality I don’t think he’s going to be able to do all of those things. There will be other politicians who will stand up and stop him from doing all the outrageous things he wants to do.”

Assaf agreed, and said that’s how he explained the situation to his children, who were wary of a Trump presidency and feared “getting kicked out.”

“I explained to them that we have a Constitution that the president has to follow and that we are American citizens who can’t be kicked out of our own country,” he said.

As an adult, Zaidan understands her rights of residency in the land of her birth and said she doesn’t fear being made to leave. However, she is realistic that some people who look and believe as she does might have a tougher time of it moving forward.

“There are definitely some people who are really going to start saying whatever they feel, whether it’s insensitive or racist,” she said. “Whatever they believe, it’s going to come out of their mouths.”

Still, she said her faith offers perspective on what many worry is the start of a terrible path not just for American Muslims, but for America itself.

“I do believe that God lets everything happen for a reason,” Zaidan said.

“We might be upset about this now, but I think whatever the reason is for Trump’s win it will be shown soon.”