MORTON GROVE, Chicago – As the temperature fell this week to subzero, a Chicago Muslim family is delivering hand-written letters to their neighbors, offering them help during the cold snap, Chicago Tribune reported.

“As temperatures dip way below zero, neighbors are the ones to help each other,” the letters written by Sabeel Ahmed and his wife, Asma Naheed, read.

The family of five delivered copies of hand-written letters to 40 homes in their neighborhood, offering to help in picking up groceries or medications, or clearing away snow.

“It was just a neighborly initiative to motivate the neighbors so more of them can hopefully connect with each other and get a sense of community,” Ahmed explained.

“Helping neighbors is a big part of the faith,” he added. “But there is also fear about Islam and Muslims. We don’t want people to judge Islam or any other faith just based on the news …. There are so many commonalities we have as humans, as Americans and as people of faith.” 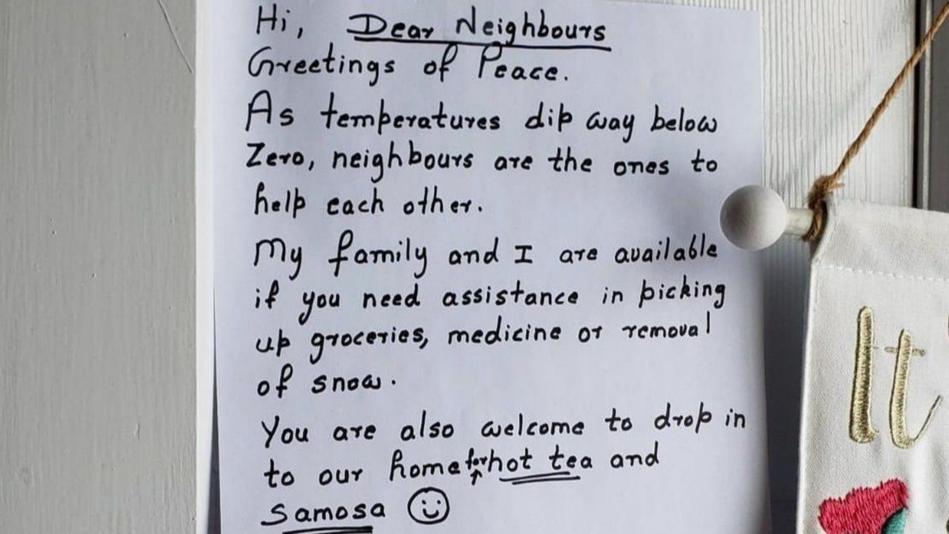 The neighbors have praised the gesture as “heartwarming.”

“I thought, ‘Wow, this is kind of old-fashioned, how we used to be,’ ” Maureen Hartnett said.

“I grew up in the city, and that’s how my block was — everybody knew they could stop at the door. [Seeing the letter] made me feel good that my family lives in a community where everybody is still like that.”

“I like to know people are around and that people care,” she said.

Though Alexander Slagg, of Morton Grove, didn’t receive the Ahmeds’ letter, he did learn about it Wednesday at work.

“It was kind of cool to see that kind of outreach going on in our community,” he said.

“Morton Grove is a pretty diverse area and because of that diversity, it’s difficult to create a sense of community. A lot of times people are involved in their own little bubbles. It was refreshing that someone was doing outreach without an agenda and reaching out to neighbors. It helps people feel connected to where they live.”

Ahmed said he hopes the simple letters and offers of help will inspire others to do the same.

“At the end of the day, we are all Americans, we are all humans, so let’s look out for other people too,” he said.

“I took two days off work,” he said. “If anybody needs help, I’m available.”

Though there are no official estimates, the US is home to an estimated Muslim minority of six to eight million.

An earlier Gallup poll found that the majority of Americans Muslims are loyal to their country and optimistic about their future in the United States.