MICHIGAN – A public Isha prayer held by the Muslim student association in the University of Michigan has turned into a show of support and unity, after hundreds of non-Muslim students made a big circle of protection around praying students.

“Some individuals were afraid that we might be vulnerable during our prayer, so we had the idea of calling allies to support us and create a circle around us while we prayed and they ensured our safety,” MSA president Farhan Ali, a junior, told The Huffington Post in an email.

“Hundreds and hundreds of people came out for both prayer and showing their support,” Ali wrote.

“The amount of support was overwhelming and absolutely wonderful, and it brought some ease to the Muslim students [and] showed that we have other individuals who are willing to stand with us.” 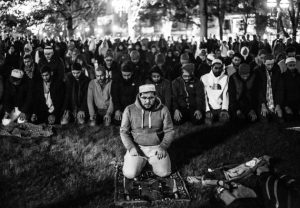 After hearing that a Muslim student had reportedly been threatened for her faith, hundreds of students and faculty showed up to stand guard around classmates who had gathered in a main square to perform one of Islam’s five daily prayers.

The heartwarming support was shown by both Christian and Jewish communities in the campus.

Some members of the crowd held signs that read, “You Belong Here,” Mohammed Ishtiaq, the university’s Muslim chaplain, said.

“Although it was a cold night, the amount of support we got was really heartwarming,” Ishtiaq said in an email.

The group Isha prayer was organized in response to reports that a University of Michigan student had been harassed by a stranger for wearing a hijab. 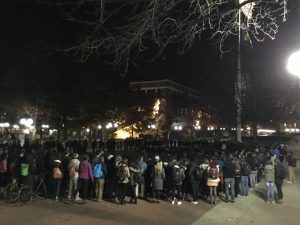 Ali said that at the University of Michigan, there was some “sadness, fear, and uneasiness” in the Muslim community immediately after the election of Trump, who called for a complete ban of Muslims entering the US.

Now, the group is trying to mobilize and organize.

“We must roll up our sleeves and get to work because the fight does not end with the election results,” Ali told HuffPost.

“We have allies who are with us and we have a community that is resilient and will not succumb to fear in light of these attacks.”