Lauren Booth tells her experience at the annual Reviving the Islamic Spirit (RIS) convention held in Canada from Friday, December 21st through Sunday, December 23rd at the Metro Toronto Convention Center in the heart of downtown Toronto.

Canada prides itself on being a nation that’s a cultural mosaic rather than a cultural mélange. The difference being that in the proverbial ‘melting pot,’ cultures meld into a single mainstream gloop.

This remains largely based on the dominant culture (as the main ingredient) meaning the loss of aspects of ideals and cultural memory related to newer communities. Whereas, the mosaic ideal, on which Canada is based, says the country as a whole becomes stronger by having immigrants bring with them their cultural diversity for all Canadians to learn from. This ‘Mosaic Nation’ is a place where peoples from a wide variety of global cultures make up a coherent yet dynamically diverse whole.

A total of 1,567,400 people identified as South Asian, in Canada in 2011, the largest group, accounting for one-quarter (25.0%) of the total visible minority population. Since then, Canadian-born Muslims have already surpassed the Arab Muslim population and are now poised to replace the South Asians as the largest group. This is a confident, highly educated and at home generation. 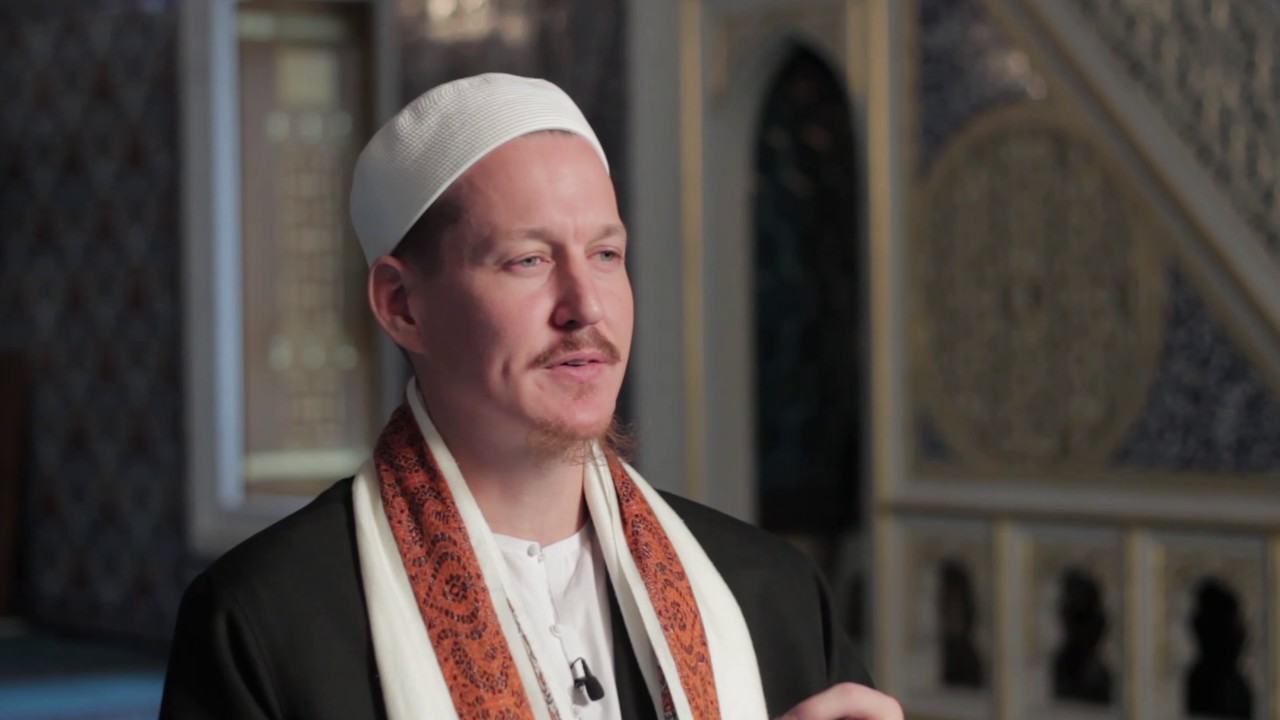 Mornings at RIS begin with spiritual lectures, exploring elements in a ‘Purification of The Heart’ series.

From the vast stage, in a grand armchair, Dr. Yassir Fazaga, in his gentle voice, candidly yet kindly called parents to account for expecting more from our youngsters than we had (be honest) ever managed in our teens and twenties. Namely – celibacy. There, I said it.

Expecting our young to be virgins from their early teens until 28 years old is a cruel thing to do.

“14 years of celibacy? Is this normal do you think about the human being?” Dr. Fazaga asked the stunned hall. The silence was broken, by a smattering of applause, perhaps, from relieved twenty-something students waiting desperately for parental permission to marry.

That morning, I shared a car to the convention center with Shaykh Yahya Rhodus. We spoke about his time in Mauritania, a region and a people whose hardships and wisdom deeply affected Shaykh Hamza Yusuf and himself.

Shaykh Yahya’s lessons to the assembly of some 12,000 contained as the saying goes ‘the universe in a nutshell.’ We should spend time alone, with ourselves, assessing our spiritual situation, be introspective. The opposite of which is to seek to impress others. In solitude, we draw closer to The Divine. 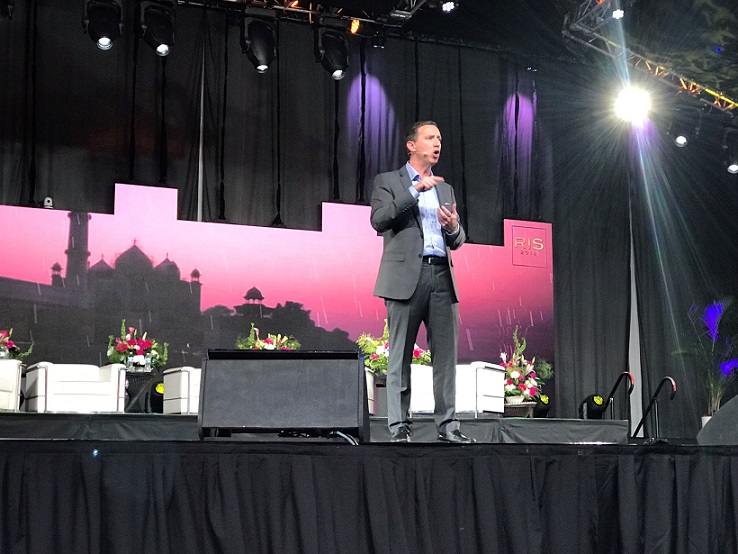 So Far So Sufi

My preconceptions of the convention, being devoid of political clout began to be challenged on Saturday by speakers who were breath-taking who’s who of political research and outspokenness.

Dr. Todd Green presented opening thoughts on the topic ‘Fear and Smear: Islam as The West’s New Bogeyman.’ Green is Associate Professor of Religion at Luther College. A nationally recognized expert on Islamophobia, he has served as a Franklin Fellow at the US State Department, where he assessed the impact of anti-Muslim prejudice in Europe on countering violent extremism initiatives, refugee and migrant policies, and human rights.

In the UK, Muslim organizations are still so desperate to be recognized by the ‘white’ ruling political class that far-right politicians who clearly distrust and dislike our faith and community are feted by hand-wringing folks, just grateful to have them speak to us at all. The guests at RIS from outside our community were invited for their expertise and their genuine interest in the causes of justice, fairness and reason.

Dr. Green’s talk explored the use of distraction techniques which prevent the US and European majority populations facing their own violent histories or asking critical questions about how their countries’ national security initiatives and foreign policies contribute to violent world order.

“White Christians,” he said, “have the most problem in recognizing hypocrisy” when asking others to condemn violence “considering our own episodes (of violence).” 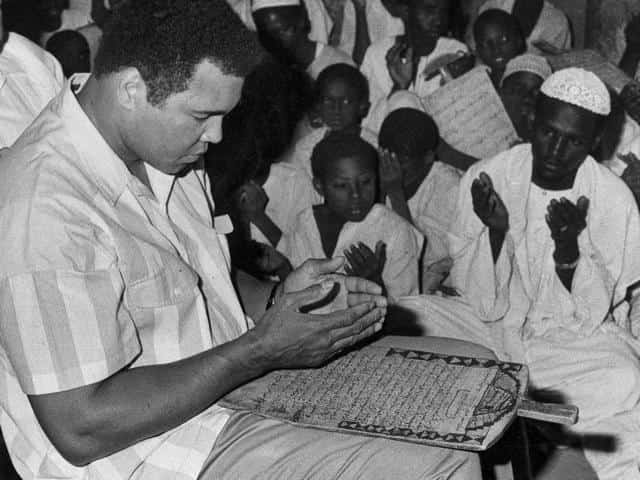 Am I Dreaming All This?

Rashidah Ali is the daughter of Mohammed Ali, a boxer, activist, and icon. To clips of the great man telling us all to focus on the ’next life’ ’the real life’, she talked about the father behind the image.

In August 1963, Ali released a comedy album titled ‘I am the Greatest’ something he regularly told reporters before bouts. Six months later he became world boxing heavyweight champion. And converted to Islam.

He had said his daughter, welcomed the disease that had silenced him, made him shudder and stumble; Parkinson’s.

To sobs from the audience, Rashidah Ali said: “because he felt that God had shown him who was The Greatest.” Did Mohammed Ali become resentful?

“He said he would rather take his punishment in this life than the next.” I wasn’t the only one sobbing. Do any of us have this level of love for Allah and the next life?

I was feeling, air-punch enlivened as if I were attending a political rally. But hang on, I thought, looking side to side, at Imam Zaid, Shaykh Omar Suleiman, to check I wasn’t dreaming; I’m amongst Muslims cheering speakers who are calling out western governments for Islamophobia.

Am I dreaming this? 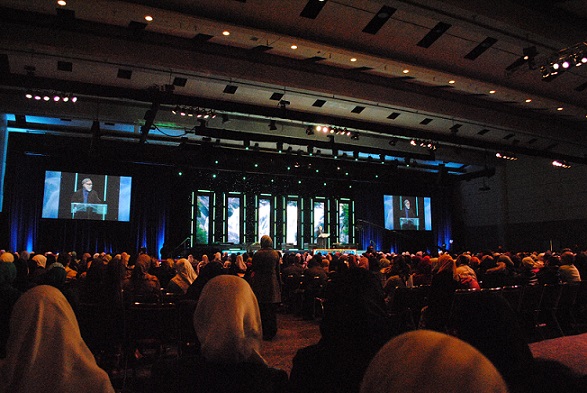 The ‘Reimagined’ of the convention title tells you this conference has moved away from traditional setups. UK Muslims are used to checking our watches as we wait for a single speaker whose words will wake us up after two hours of fundraising agony.

The likes of RIS are leading the way for seminars in which speakers must deliver Ted Style Talks. Just yourself, beneath stage lights, with a mic which (alhamdulillah) doesn’t screech, before thousands of expectant faces.

Content must be tight. No blathering allowed. We are being prompted to raise our game, to reach people expecting a certain style of presentation.

The Prophet SAWS when speaking or delivering a speech, observed the abilities of the addresses listening. The examples he used were chosen from a world in which the listener lived and understood well. Some of the people around him were from the city while others were Bedouins (living in the desert).

The most common examples our Prophet, peace upon him, would use from the animal kingdom, when speaking to desert people, would be camels, and from plants, the date. 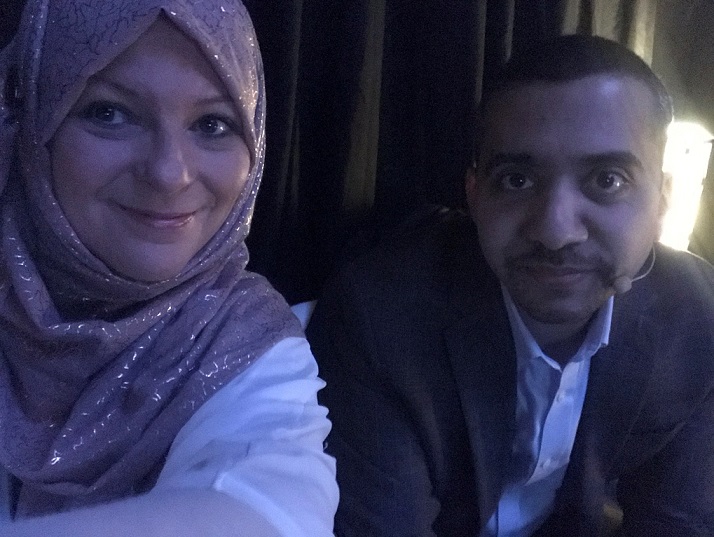 Choking on My Latte

Mehdi Hasan gave a barnstorming speech bringing cheers from the auditorium with phrases like:

“What did the war on terror give us except more war and more terror?” As Muslims in the West we are thriving, he said, our existence is resistance.

“We are breaking down walls and smashing glass ceilings,” he said, to cheers.

Dr. Hatem, co-founder and Professor of Islamic Law and Theology at Zaytuna College and founder and national Chair of American Muslims for Palestine raised the roof with a takedown of the phrases used in American politics in order to ‘construct ‘whiteness’ bonds’ seeking to marginalize all people of color and specifically Muslims from mainstream life.

When I saw personal favorite, pollster, Dalia Mogahed listed to give speeches and panel discussions I knew, as the saying goes that I was ’no longer in Kansas.’ Meaning: I had to throw out my preconceptions and that I had entered new territory.

This conference and its speakers is a gift to the ummah, capable of growing a generation of compassionate, awake social activists of faith. I saw a generation coming up with ability, hope, and compassion for society as a whole.

I realized the activity of looking inwards to change ourselves is a practice given to us by our own Prophet SAWS does not negate activism but guides it.