“From January up to now, our situation was good and now we have won the election with the public vote. I am very happy,” Abdi Warsame, who won a seat on the Minneapolis city council, told Voice of America.

He was elected in 2013 as the first Somali-American to serve in a municipal office. 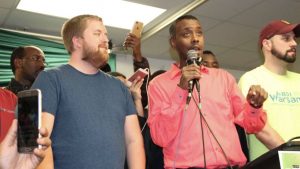 Also in Minneapolis, Abdulkadir Hassan, a Somali-American, won a seat on the Park and Recreation Board.

In Washington state, Zak Idan became the city of Tukwila’s newest council member, replacing a man who decided not to run after holding the seat for 36 years.

In Iowa, Mazahir Salih was elected as a member of the Iowa at-large city council, becoming the city’s first Sudanese-American immigrant councilor.