On a daily basis each Ramadan since 2013, the Dabbours family in Philadelphia has been cooking and donating daily iftar meals for free to needy Americans regardless of faith, WHYY reported.

“We began as an empty warehouse but, over the years, has grown to include a grocery, restaurant, and bookstore,” said Amer Dabbour who settled in the USA with his wife Dalal after leaving Syria in 1992.

Amer’s brother established Al-Amana Grocery at the rear of Al-Aqsa Islamic Society in Olde Kensington neighborhood in Philadelphia city. In 2003, Amer took over the business with his sons, Jawad and Anas.

The Dabbour family began to offer meals during Ramadan after an anonymous donor gave them the means to do so six years ago. Since then, they’ve been providing three-course dinners, free of charge, to anyone who wishes to join them. 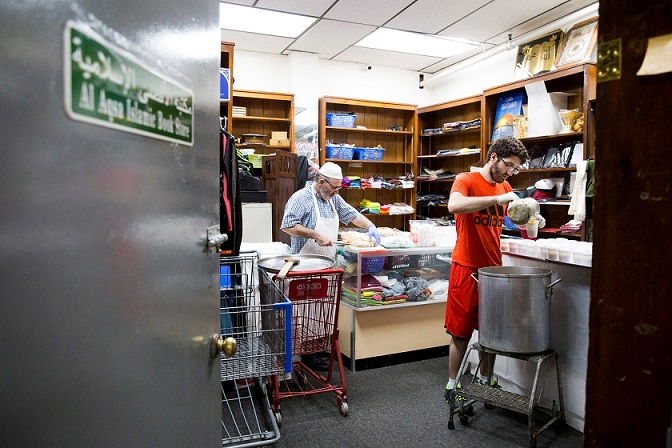 The diners are mostly practicing Muslims who pray at the Al-Aqsa Mosque, but neighbors and the homeless who wish to join are never turned away and they often receive up to 350 guests.

The dinner also draws local politicians, including former Philadelphia Mayor Michael Nutter, who joined them for Ramadan during his time in office.

“We’re all family here, so we can’t turn anyone away… if we have food, we have to give it,” said Anas, who views the practice as his Allah-given duty. “I hope we’ll be forgiven, given what we’re doing for the community and people.” 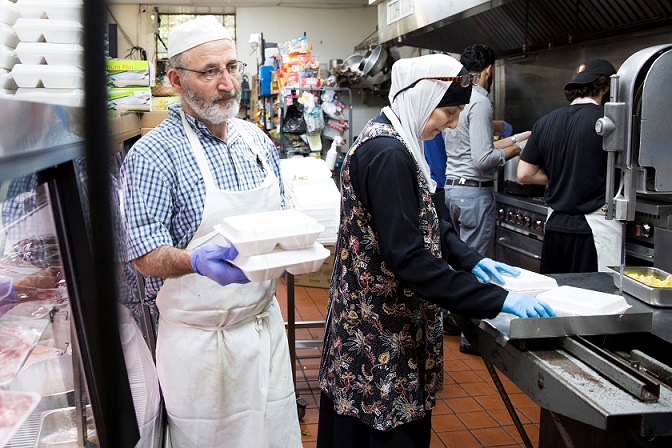 The four members of Dabbour family and two volunteers serve their customers efficiently and happily. Anas says that it will be “near midnight when the family gets to eat anything themselves before driving back to their home in Northeast Philadelphia, only to repeat the process the following morning.”

Philadelphia is the largest city in Pennsylvania, and the 6th most populous American city, with a 2018 census-estimated population of 1,584,138. Moreover, its urban core is the 8th largest American metropolitan statistical area, with over six million residents as of 2017. 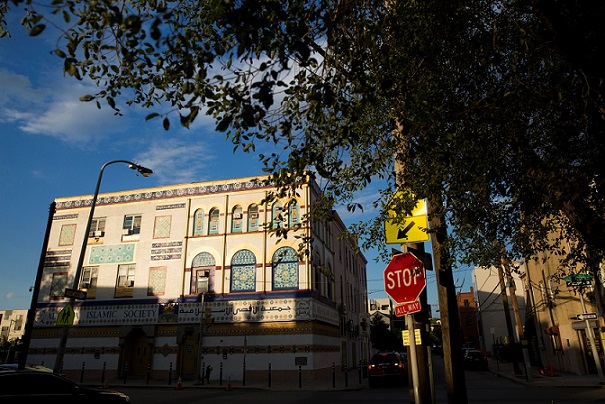 The Al-Aqsa Islamic Society is seen at dusk on May 20, 2019, the thirteenth day of Ramadan. (Rachel Wisniewski for WHYY)

According to a 2014 study by the Pew Research Center, 68% of the population of the city identified themselves as Christian, while the remaining 24% are atheists.

The same study counted that other religions collectively comprise about 8% of the population, including Judaism, Buddhism, Islam, and Hinduism. The largest concentrations of Muslims live in the Northeast and North parts of the city, Center City, West Philadelphia, and sprawling into the nearby suburbs.

The Muslim African American community in Philadelphia has grown substantially over the last decade. According to several statistics, Philadelphia has surpassed Detroit and New York City to become the American metropolitan area with the highest proportion of Muslims.