KING COUNTY, Seattle – Thanks to the effort of a Muslim group in Seattle, many homeless people in the region were able to escape the snow over the weekend after they were offered free hotel rooms, Cross Cut reported.

“Our Muslim faith teaches us to take care of our neighbors during times of need,” said Nickhath Sheriff, founder of the social services arm of the Muslim Association of Puget Sound, which is known as the Muslim Community Resource Center.

The Muslim Association of Puget Sound (MAPS) provided hotel rooms for all 28 residents of Tent City 4, an encampment in Issaquah.

The effort came as three people, probably homeless, died from exposure over the weekend in King County, Seattle according to Sean Whitcomb, public affairs director for the Seattle Police Department. 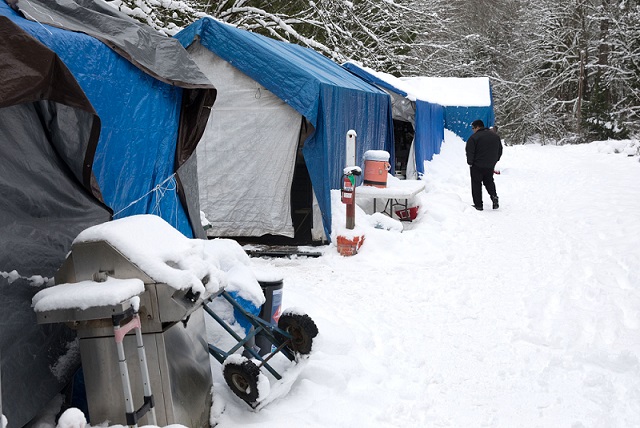 “It is heartbreaking to see many people in our community without a roof over their head living in the cold and the snow while we stay warm in our homes,” Sheriff said.

“Although we realize that there are more people in a similar situation, this is a small effort on our part to help at least a few of them.”

Edwin Figueroa, 54, is one of those who were offered rooms thanks to Muslim community donations.

“It is a blessing,” said Figueroa, who describes himself as spiritual though not religious.

“They’ve always helped me when I’ve been in trouble. It’s like a springboard,” Figueroa explained, as he sat on the bed in his small hotel room, which featured orange walls and curtains.

Last week, the oldest mosque in Canada opened its doors to shelter the needy and homeless of all faiths between 6 pm and 10 am as temperatures were expected to reach a chilling low of -43°C overnight

In the UK, a Birmingham mosque opened its doors this week to help homeless and rough sleepers during freezing winter temperatures.