NEW JERSEY – A group of American Muslim students from Rutgers University have launched their Muslim Feminists for the Arts collective this fall, introducing the community to the concept of Muslim feminism while representing Muslims in the arts.

“The concept of giving women equal rights and a voice has been part of Islam since its inception,” said Zahra Bukhari, a senior at Rutgers-New Brunswick’s Mason Gross School of the Arts who co-founded the Muslim Feminists for the Arts collective with twin sisters Usra and Sarah Attalla, My Central Jersey reported.

“This group is being unapologetic about those two words [“Muslim” and “feminist”]. We are about proving they are synonymous with each other.”

The group has kicked off its first exhibition, “Hello, My Name is,” which is on view through Nov. 17 in the Civic Square Building.

“We are using art as a universal language and tool to reach people from diverse backgrounds,” said Bukhari of the exhibition.

“Each member’s piece is meant to communicate our narrative and dispel myths in the media about what Muslim women are supposed to be.”

Bukhari said their work includes debunking myths linking hijab to oppression and honor killings to Islam, while upending the notion that a Eurocentric brand of feminism is the only brand of feminism available to women around the world.

“The idea of the white savior — women and men injecting themselves into a culture and religion and imposing on it their own ideals of what feminism is —  is a way to justify labeling those who don’t look like you as ‘other,’” the visual arts major said. 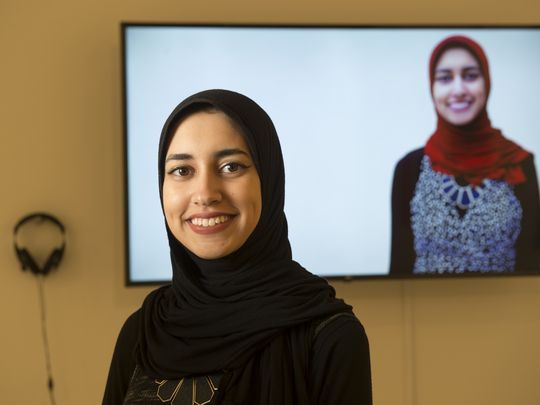 Though Bukhari, who chooses not to wear hijab, says she has not experienced religious discrimination personally, she felt a need to help those suffering.

“My image speaks louder because it already defies the stereotypes of what a Muslim woman looks and acts like,” said Bukhari. “We have a responsibility to do something.”

Muslim Feminista for Arts Co-Founder Sarah Attalla, who wears hijab, said she feels a sense of obligation to share her story.

“I was afraid to speak up for myself, but people knew that I was Muslim because of the way that I dress,” said the Mason Gross junior.

“I graduated and realized that nobody was left to give the town that diversity that I had given. I should have used my voice because I did not break many stereotypes by being silent.”