HOUSTON – Mustafa Elhaj has fasted a time or two. Only nine years old, the third grader has already completed at least part of the last two year’s Ramadans, but this year he’s going all out, firm in the intention to fast the entire month without interruption.

However, this Ramadan comes with a twist. It will be the first time in Mustafa’s young life that he’s had to contend with fasting while in school. That translates to no refreshing gulps of water after a sweaty recess or physical education class.

That means facing weary early-morning wakeups after late nights at the mosque or early-morning suhoor meals. Finally, and perhaps worst of all, school-time fasting for young ones means attending the year-end bashes and forgoing the traditional sweets and treats which are a menu mainstay at elementary school bashes.

It can be tough, but Mustafa – who lives in Atlanta, Ga. – isn’t worried. He’s got a plan.

“During lunch, I’m going to talk to my friends, but I’m not going to look at what they’re eating so that way I won’t get thirsty and hungry,” he explained to AboutIslam.net. “At recess, I’m going to sit on the bench and take it easy and stay out of the sun. I don’t want to get dehydrated a lot because then I’ll get thirsty.”

“He’s really active, and I don’t know if he can control himself and not play his hardest,” she said. “So I’ve explained to him that he can try out (fasting in school) but he can break the fast if he has to.”

However, interrupting his fasting is not on Mustafa’s mind.  A lover of suhoor, the pre-sunrise meal, he intends to make sure he’s prepared for the day ahead.

Shalabi said Mustafa’s father will wake with him and make sure he has enough food and water to sustain him through his long school day.

“He likes to have dates and bananas, just whatever it takes to keep him full and hydrated. He also eats eggs to get his protein in,” she said. “I just want to make sure he eats a full-blown breakfast.” 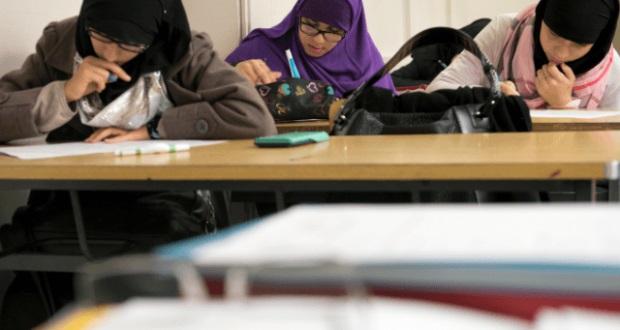 Mustafa said he knows fasting amid non-Muslim friends is tricky, especially when they don’t understand why he refrains from eating and drinking.

“My friends will say, ‘Aren’t you starving?’, but I just tell them it’s easier than people think and I like to fast because I want to get rewards from my God,” he said.

For those who push the issue, Mustafa said he is firm in his intentions not only to fast but to explain what it means to him and why it’s important.

“It can be difficult because some kids will start to look at me and question why I won’t eat and tell me I shouldn’t do it, but I just tell them that this is for my religion and it’s my celebration,” Mustafa said.

His mother said she’s proud of his efforts to fast despite difficulties. “It’s encouraging to see the kids fast voluntarily and to see how they like to tell their friends at school about it,” Shalabi said.

Nisreen Hammad, a nine-year-old living in Texas, said she enjoys fasting amongst her schoolmates.

No matter her friends’ reactions, Nisreen isn’t fazed. Like Mustafa, she knows what she has to do to make fasting as easy as possible from sunup to sundown.

“In my opinion, I have a perfect bedtime so I can wake up at the right time to eat my breakfast,” she said. “I eat eggs and lots of pancakes and a lot of water to get me full. Then when I’m at school I just don’t think about food.”

However, unlike Mustafa, Nisreen prefers to excuse herself from the cafeteria rather than watch everyone eat.

“I go somewhere else because seeing them eat makes me really uncomfortable,” she said. “So maybe I’ll go to the library and read a book.”

Both Shalabi and Nisreen’s mother Ashley Hammad seem more concerned about their children’s school-time fasting than their children.

“I think I’ll be nervous to see how the first day goes,” Shalabi said. “I’m more concerned with Mustafa not staying up late to eat because if he has school the next day he has to get a good night’s sleep, but if he has to wake up for a midnight snack I’ll be OK with that.”

Hammad said she’s explained to Nisreen and to her daughter’s teacher that if she becomes really thirsty or starts to feel sick then it’s important she break her fast and make it up later.

“For PE I don’t want her to do any strenuous activity,” Hammad added. “She can do stretching and walking, but that’s it.”

Nisreen isn’t worried, even when it comes to end-of-year parties which are typically laden with goodies to eat.

“I’m not really into candy so I can just skip it, and it’s all fine with me,” she said. “I’ll just play the games instead.”

Mustafa is just as confident all will be well come Ramadan, so long as he sticks to his plan.

And as for completing the whole month without a break, he said that’s a given.

Are Your Children Ready for Ramadan?