TORONTO – Dr. Cornel West called on Muslim youth to live up to their faith and be resilient in the face of the current challenges in the world.

He made this remark at the recently concluded Reviving Islamic Spirit (RIS) Convention in Toronto.

“We want Muslims who aspire to greatness, spiritual greatness, moral greatness rooted in the past, creating something new. Never forget that those who came before you always created networks in the world but not of the world.”

Cornel West is a prominent and provocative democratic intellectual. He is Professor of the Practice of Public Philosophy at Harvard University and holds the title of Professor Emeritus at Princeton University.

This year’s RIS convention was held from Friday, December 21st through Sunday, December 23rd at the Metro Toronto Convention Center in the heart of downtown Toronto.

Thousands of people attended the convention to listen to leading Islamic scholars, academics, and motivational speakers, and to meet and mingle with fellow Muslims, and discuss matters of faith and contemporary issues. 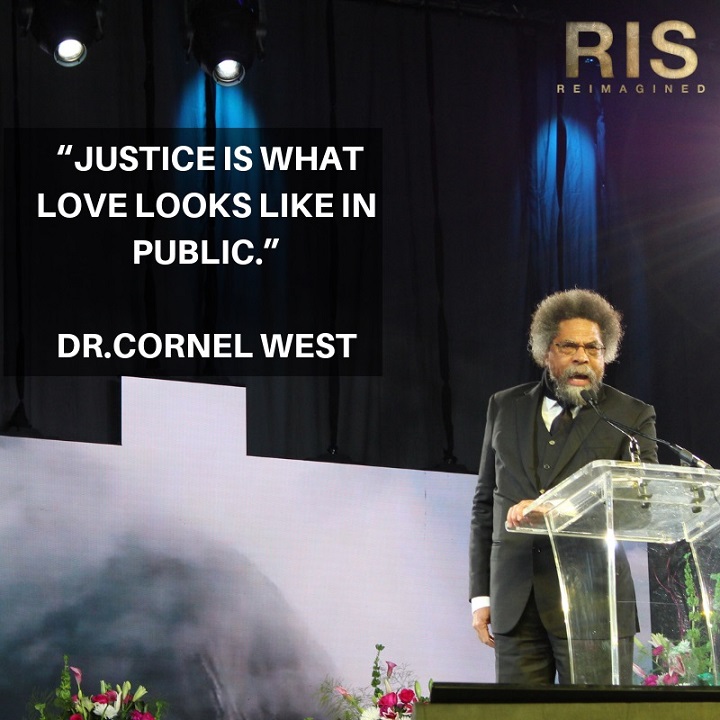 Dr. Cornel West addressed the gathering on Saturday evening on the topic, ‘Hope on a Tightrope.’

“So much of what I have to say tonight has a lot to do with young Muslim brothers and sisters because you can be the leaven in the loaf for a new world in the making,” he said.

“You can’t talk about hope in the abstract, it’s got to be concrete, you have got to fleshify it, you’ve got to feel it at the deepest level, it’s got to be soulful and I come from a soulful people,” added West.

“400 hundred years of being chronically and systemically hated as black people in the United States of America yet we taught the world so much about love and no Christian, no Muslim, no Jew, no agnostic, no atheist hold a monopoly on that love train.”

West has a passion to communicate to a vast variety of publics in order to keep alive the legacy of Martin Luther King, Jr. – a legacy of telling the truth and bearing witness to love and justice.

“A love of truth and a condition of truth is always to allow suffering to speak. A love of beauty and there is no quest for beauty without wrestling with terror and trauma. A love of goodness, there is no wrestling with goodness without coming to terms with the evil inside each and every one of us, wrestling with that civil war on the battlefield of our own souls, and trying to push back that lower self, as my Islamic brothers and sisters put it so eloquently, to allow for the best to emerge,” continued West.

West appealed to the attendees in his rousing keynote address saying, “it is a market-driven culture in which profit sit at the center – it produces a spiritual emptiness and moral decadence. We are living in decadent times on the spiritual level and let us not be deceived.”

“You might want to engage in spiritual warfare inside of yourself and against any attempt to push aside integrity, decency, generosity, courage, and fortitude.“

“My young Muslim brothers and sisters, do not become so overawed by the financial success that you find yourself well-adjusted to injustice. You have a calling, not just a career; you have a vocation, not just a profession; you have a life-task, not just a job,” noted West.

“This struggle is a long struggle and I want you to be a marathoner, not a sprinter. Long distant running means that you have to find joy in learning how to die in order to learn how to live, joy in critical examination, joy in solidarity with others especially those who are pushed to the margins.”

The Reviving the Islamic Spirit (RIS) convention was first launched seventeen years ago by Muslim youth to tackle the backlash on Islam and Muslims after the 9/11 and to build a bridge of understanding with non-Muslims.

The event has become a staple in Toronto’s downtown core during the Christmas holiday season and close to 20,000 people come from all over North America and around the world to attend the convention.