David Scholder, the marketing and social media director at the Jewish Community Alliance in Portland, with photos in a new exhibit telling the story of how Albanian Muslims saved Jews from the Holocaust. The exhibit is on display through the end of April.
aaa

PORTLAND – The heroism of Albanian Muslims, who sheltered and saved the life of their Jewish neighbors and Jewish refugees during WWII, is being celebrated in a Portland exhibition.

“By recounting the brave acts undertaken by ordinary people under extraordinary circumstances, this remarkable body of work reveals the capacity we each have to act with compassion, even when doing so may put one at great peril,” David Scholder, the marketing, and social media director at the Jewish Community Alliance, told The Forecaster on April 10.

The exhibition, “Besa: A Code of Honor – Muslim Albanians Who Rescued Jews During the Holocaust,” is a project of the Yad Vashem Holocaust Remembrance Center.

It consists of 16 large panels, each panel contains a photograph by Norman H. Gershman, accompanied by a brief text that tells the story of the people and their descendants who defied the law and protected the Jews of Albania.

One of the panels tells the story of Higmet Zyma and her husband, Bessim, who was a doctor. Bessim had a clinic in his basement and hid a Jewish man from Poland by wrapping his face in bandages.

“The Nazis did not bother us,” Higmet recalled.

Another panel recounts how Aishe Kadiu and her family sheltered two Jewish boys from Greece.

“When the Germans began house-to-house searches, my father took (the boys) to a remote village. We then supplied them will all their needs until the liberation,” Kadiu told Gershman. “Those years were fearful, but friendship overcame all fear.” 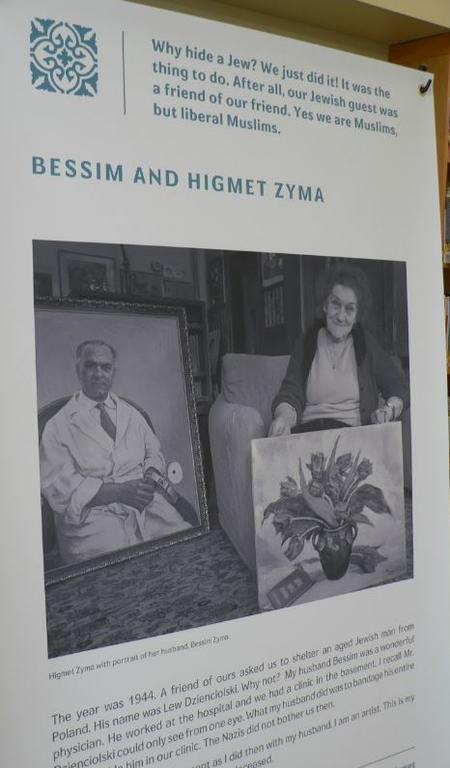 Higmet Zyma and her husband, Bessim, saved a Jewish man from Poland by hiding him in their basement during the German occupation of Albania.

The exhibition is regarded as a chance to portray a true image of heroic Muslims, at a time of much negativity targeting Muslims.

“Albania succeeded where other European nations failed,” according to a Jewish Community Alliance press release.

“Following the German occupation, the Albanian(s) refused to comply with orders to turn over lists of Jews. Moreover, various governmental agencies provided many Jewish families with fake documentation that allowed them to intermingle (with) the rest of the population.

“The Albanians not only protected their (own) Jewish citizens but also provided sanctuary to Jewish refugees,” the release continued. “The remarkable assistance afforded to the Jews was grounded in Besa, a code of honor, which still … serves as the highest ethical code in the country.”

Scholder said telling the story of how Albanian Muslims saved Jews during WWII is especially important “at a time when negative images of Muslims, immigrants and asylum seekers persist in the media landscape and the national conversation.”

“The Besa story presents a very different perspective,” he said, “one characterized by empathy and courageousness. (The exhibit is also) … an inspiring story of interfaith cooperation and Holocaust history. As fewer and fewer Holocaust survivors remain, exhibits like this become increasingly important to ensure that the Holocaust is not forgotten.”

“We hope that visitors will be moved and inspired by the humanity, kindness, and warmth embodied in these photographs and stories,” Scholder added.

Ceremony of the Innocent: A Journey to Lands of BESA & Srebrenica

US Muslims and Jews Work Towards Common Values