PHILADELPHIA – Muslims in Northeast Philadelphia opened on Sunday afternoon a free health clinic to provide health services to the needy and poor.

“I’m really hoping today, with the grand opening, people will just see that we’re really not different from all the other organizations,” Dr. Ammar Shahid, medical director of SHAMS Clinic told whyy.org

“We’ve reached out to the local churches, synagogues, local businesses and let them know that sure we’re under a Muslim name and Muslim leaders, but we are open to everyone,” he added.

“We’re not discriminating based on race or culture, even where you’re from. The whole community is helped, not just the Muslims here.”

Called SHAMS, the new clinic is an acronym that stands for “Social Health and Medical Services.” It is also the Arabic word for “sun,” as the staff says the idea of the clinic is to bring brightness to peoples’ lives.

Opening its doors in the poorest big city in America, with about 400,000 people living below the poverty line, the clinic will offer help to all faith groups for free.

It will also serve more than half of the city’s roughly 75,000 Muslim residents who live in poverty, and one in four lack health insurance.

The clinic operates with about 10 volunteer doctors and serves anyone who doesn’t have health insurance or can’t afford co-pays.

The national Islamic Circle of North America or ICNA funds the clinic, along with support from mosques and individual donors. 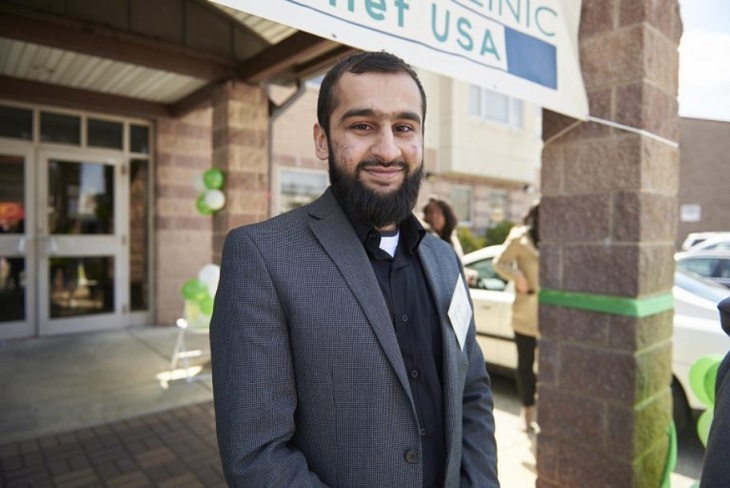 Following the announcement of the clinic plans, some Philadelphians voiced opposition on social media and phone calls to City Councilman Bobby Henon, whose Northeast Philadelphia district includes the Holmesburg neighborhood where SHAMS is located.

Nevertheless, Henon confirmed that the majority were welcoming and open to the new plan.

“It doesn’t reflect the rest of the neighborhood,” Henon said.

“It doesn’t reflect the community. I mean, there are many, many social service organizations from Catholic, Protestant, Episcopal, to Muslim communities all across the city of Philadelphia. So to me, there’s no difference.”

In a city with a growing number of Hispanics, African Americans, and immigrants, similar health facilities were needed to reflect the city’s diversity.

“You can see Northeast Philadelphia changing in its diversity,” Henon said.

“So there is a need for the underserved in certain diverse cultures and rich communities, which I think this clinic provides in Northeast Philadelphia.”

“I think initially it was just lack of awareness and miscommunication and misunderstandings between the communities,” said Baqai.

“We didn’t really do a good job of introducing ourselves, so it might have felt like we were just outsiders coming in.

“But I think over time we’ve been able to communicate better and you know we’re just trying to provide a good service and they know there’s a need for this in this community, as well.”

Operating currently only on Saturdays from 11 am to 2 pm, the clinic management hopes to expand its efforts with more volunteers.

“After this, we probably would like to have some specialists involved in this and get them on board,” said Mahmoud Siddique, an anesthesiologist at nearby Jeanes Hospital who sits on the board of SHAMS Clinic.

“Some of the volunteers have already shown some interest in that. And once that happens, we can build on that and provide as many services as possible.”