MADINAH – Before embarking on the five-hour coach journey to the blessed city of peace, Madinah, our group of orphans, disabled children, carers and widows, have the chance to pray the congregational Friday prayer at the Kaa`ba.

To enjoy a spot inside the coolness of the Haramain you must arrive two hours earlier. I squat instead, with thousands of men and women in blazing sun in a less than lovely, barely paved area of the vast courtyard. Here the aroma is not of the musky Oud scent I have grown to love, but an altogether less pleasant scent from the nearby toilets. Never mind.

Orphans Pray for Refugees at Kaa`ba

All is not easy in this life, I think as I try to squeeze into a space in front of some women whose harsh, village life, does not endear them to my white skin. They kick my bag and my back when I sit down, the universal silent sign for ‘Move!’. I shuffle into the shade of a plastic barricade and plead with Allah to keep us all patient with one another.

Suddenly, I hear a scream from the women. A tiny white kitten just a few weeks old has tried to find shade between them. Perhaps afraid of rabies, the woman flings the little shape with such force across the floor, it tumbles over itself. And like a cartoon character, has to shakes its head to walk straight when it comes to a stop, back in the pounding sunshine.

Millions of Muslims come to Makkah each year to carry out the rituals we are advised will pave our way to forgiveness from the Divine Creator. We will go through some hardship, taking part in grueling, sweaty circuits of the Kaa`ba. We will chant litanies of praise and pleading. But, what should we learn from our time here? What is the point of all this physical work if no change takes place. Change which will improve our behavior to other living things as a result of our pilgrimage? 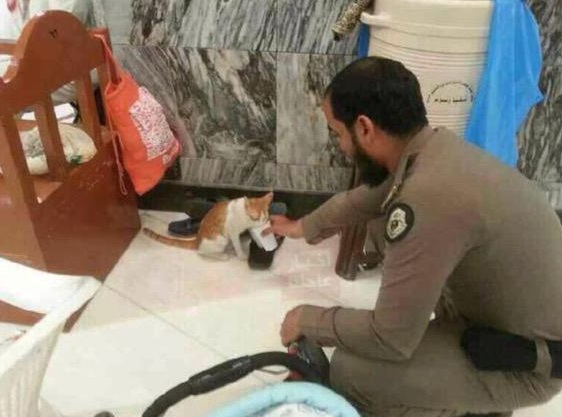 Abu Hurayrah, a famous companion of the Prophet (peace be upon him), who is the source of a great deal of knowledge the world has about the Prophet’s habits, sayings and behavior, nicknamed Abu Hurrah (literally father of kittens) by the Prophet, as an affectionate recognition of Hurayrah’s love and care for a cat.

In an authentic narration, Ibn ‘Umar that The Messenger of Allah, peace upon him, said: “A woman entered Hell because of a cat which she tied up and did not feed, nor did she let it loose to feed upon the vermin of the earth.” (Narrated by al-Bukhaari, 3140; Muslim, 2242).

I know of a young atheist woman who loved animals and was worried by the cruelty she had read about purportedly towards animals practiced by Muslims. She read this Hadith and it so touched her heart she accepted the faith at once, saying ‘any man with this much mercy has my loyalty.’

Back in the courtyard, I scoop the white and ginger kitten into my hands. I expect a good scratching, but the little thing is so exhausted and dehydrated it puts up no fight at all. It lies in my lap, a purring ball of fluff. It takes three whole capfuls of zamzam water before its thirst is quenched, about half a liter in terms of size.

I sit, stroking it asleep, in utter bliss, as the Imam of Kaa’ba gives the sermon. After a while, it pokes its face out of the shawl I am using to shade it from the sun. It’s eyes squint gently once, twice, three times and stare right into my own. It is the sweetest thank you I have ever received. I even try to pray with the kitten in my arms (to the amusement of the security guards). I give up, gently laying it down on my shawl. When the prayer ends, the kitten is gone.

There are dozens and dozens of cats which survive in and around the holy place in Makkah. They receive scraps of food from some pilgrims, but too often are chased by children for amusement or kicked by a slippered foot for the crime of seeking food, water or shade from those of us who supposedly follow the Sunnah of Rasulallah [the Prophet].

Ten hours later, children and adults take a food break on our journey to Madinah. At a small roadside cafe, cartons of rice and chicken are hurriedly eaten. We want to reach Madinah in time to pray fajr. As the other boys re-board the coach, Ali, the tough 13 year old, whose mother died seven years ago, runs from table to table. I congratulate him for tidying up. He shakes his head and points here and there.

‘Cats need food’ he says in Arabic. He carefully lays down trays, as lithe shapes emerge, gratefully from the darkness.

A fitting way to continue the orphans journey to the place where the kindest man who ever lived, lays, ready to receive our greeting.