WASHINGTON – NBA Muslim legend Kareem Abdul-Jabbar was among the list of 21 esteemed Presidential Medal of Freedom recipients on Tuesday, who was greeted by President Barack Obama at a White House ceremony with a mixture of humor and sincerity.

In the ceremony, Obama jokingly praised Kareem’s acting work in “Airplane” and opposite Bruce Lee in “Game of Death,” saying, “We’ve got some great actors here.”

The president added of the other NBA legend on the dais, “Here’s how great Kareem Abdul-Jabbar was: In 1967, he had spent a year dominating college basketball, and the NCAA bans the dunk.”

In addition to the basketball praise for both Michael Jordan and Abdul-Jabbar, Obama lauded both for their efforts to benefit charity and diversity.

The president, standing respectably tall at 6’1”, was still no match for the NBA legend Abdul-Jabbar, who at 7’2” had to bend backwards, making for an awkward reverse bear hug as Obama awarded him his medal. 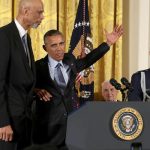 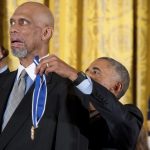 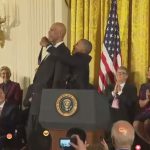