NEW YORK – In a bid to combat the rise of anti-Muslim hate crimes, New York city officials have launched a new series of public service announcements and educational workshops aimed at stemming these instances of Islamophobia.

“These bold new ads affirm every Muslim New Yorker’s right to live safely and free from discrimination,” Carmelyn P. Malalis, chair and commissioner of the NYC Commission on Human Rights, said in an email to MIC on Monday, September 26.

“They also show that Muslims are hardworking New Yorkers just like you and me. They are our police, our teachers, our small business owners and our neighbors and they deserve the same respect as everyone else.”

The text embedded in the ads reads, “I am Muslim. I am NYC.” Cumulatively, they seek to remind New Yorkers that religious-based harassment and discrimination is illegal in the city.

The campaign was launched in partnership with the Mayor’s Community Affairs Unit, the Office of Immigrant Affairs and other NYC Muslim community leaders, and the Commission on Human Rights.

The commission will supplement the campaign with educational events aimed at improving interfaith relations and combating Islamophobia in the city.

One of these will be a workshop titled “Understanding Islam,” to be held at New York University’s Islamic Center; the workshop is designed to help city, public and private employees learn more about the faith and break any misconceptions about Muslims.

The pilot workshop is scheduled to begin in October. 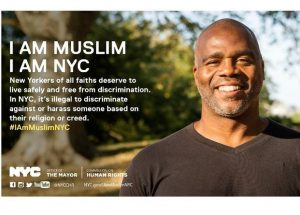 The new efforts come at a hard time for Muslims who have been facing increasing hate crimes triggered by hateful rhetoric in presidential campaign.

Earlier on September, a female Muslim tourist was set on fire by attacker in Midtown Manhattan for wearing a hijab and traditional Islamic garments.

In June, Mohamed Rasheed Khan was brutally beaten by three men when riding his bicycle home from evening prayers at his mosque in Jamaica, Queens.

Queens Imam Maulama Akonjee, 55, and his assistant Thara Uddin, 64, were also murdered, leading to an uproar and protest from many New York Muslims.

Hoping to end hate, representatives of the New York City Commission on Human Rights hope their anti-Islamophobia campaign will soothe the concerns expressed by the New York Muslim community and extinguish anti-Muslim vitriol.

“In New York City, we will not tolerate discrimination or violence of any kind against hardworking Muslim communities and their families and we will not let the hateful rhetoric that has become so prevalent in our national dialogue become the norm in our great city,” Malalis said.