NEW YORK – As Trump prepares for inauguration, American Muslim comedian Dean Obeidallah took to the stage this week to tell the crowd it was time for “comedy resistance.”

“Look at how many brown people are here!” Dean Obeidallah said to cheers after taking the stage Sunday at the Comic Strip Live, a comedy club on the Upper East Side of Manhattan, The New York Times reported on Tuesday, January 17.

“This room,” he said, “is Donald Trump’s worst nightmare.”

The show, The Big Brown Comedy Hour,” started in 2009 by Obeidallah, who is half-Palestinian and half-Italian, as a way of giving stage time to comedians of Middle Eastern and Southeast Asian descent.

Sunday’s show, advertised with the tagline, “the last laugh before Trump deports us,” was one of a rapidly growing number of political protests by artists using their platforms to speak out against president Donald Trump.

The Muslim stand-up performer is one of several comics who launched their comedy resistance on Sunday.

Maysoon Zayid, a Palestinian-American who Obeidallah calls his comedy sibling, spoke the most vividly about the anxiety that some Muslims are grappling with in the age of Trump.

During her set, she said she was suffering from “Trump-pression” and was losing her eyebrows as a result.

“I am Donald Trump’s worst nightmare: I am Muslim, I bleed wherever, and I’m disabled — I have cerebral palsy, so I shake all the time,” she said, referring to Trump’s mocking of Megyn Kelly, then a Fox News host, and of Serge F. Kovaleski, a reporter for The New York Times who has arthrogryposis, which limits the functioning of his joints. 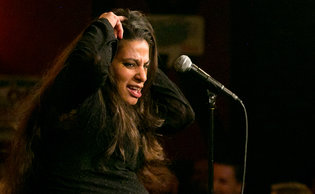 Zayid once gave a TED Talk on living with cerebral palsy, and her routine was almost entirely a takedown of Trump, using exaggeration and hyperbole to play to the crowd.

Zayid once gave a TED Talk on living with cerebral palsy, and her routine was almost entirely a takedown of Trump, using exaggeration and hyperbole to play to the crowd.

“I’m genuinely afraid that Trump is going to nuke Canada,” Zayid said during her set. “And he’s not going to realize that the fallout is going to take us out too, right? And I think the motivation is Justin Trudeau is a 10.”

Mahnoor Waseem, a 21-year-old political science student at Montclair State University in New Jersey, was one of the attendants.

Waseem was born in Pakistan and arrived in the United States a few months after the Sept. 11 attacks. She called the 2016 election “emotionally strenuous,” and said she reacted to the comedy show with “nervous laughter.”

“Because I hope that whatever the comedy, the material doesn’t become true,” she said. “So it was like, close my eyes and hide.”

But she said she did not have a visceral hatred of Trump and that she had to be loyal to the country and the president, “regardless of who the president is.”

“I felt a little bit of hope,” she said. “That hope comes with my faith.”