TORONTO – The Reviving the Islamic Spirit Convention (RIS) got underway on Friday, December 23, in Toronto with thousands of people from North America and beyond streaming into Metro Toronto Convention Centre for the three-day gathering.

The challenges facing Muslims in the US and around the world were the central theme of the Friday Khutba delivered by Imam Zaid Shakir as well as the presentations of other speakers.

“The tree waivers when the roots are not firmly planted in the soil,” said Imam Zaid Shakir in his sermon.

“Before America was America and before Canada was Canada, there were Muslims here who were enriching this land.”

“We are a spiritual brotherhood,” added Imam Shakir. “The Africans who were brought to this land as slaves are your spiritual ancestors.”

“By embracing them you are planting your roots,” he continued. “We do not have the time to figure out who we are. That question was settled a long time ago.”

American Muslim activist, Linda Sarsour urged the audience not to be apologetic about their religion. 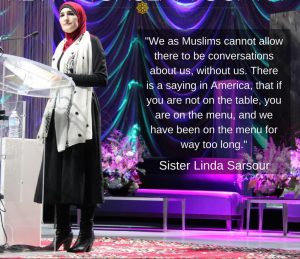 “You have no choice but to be politically engaged,” she continued. “Dissent is the highest form of patriotism.”

“If you are not at the table, you are on the menu and we have been on the menu for way too long,” added Sarsour. “I don’t like to be on the menu.”

Later in the evening, British political journalist and author, Mehdi Hasan, made a passionate plea to the convention attendees to be proud of their faith and work for change.

“In times of darkness, there is an opportunity to spread light,” said Hasan. “Now is the time to stand up and speak proudly.”

“Be the change you want to see in the world.”

Organizers are expecting over 20,000 attendees to attend the convention that will run over the weekend in the heart of downtown Toronto. 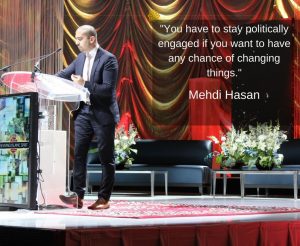 The theme of this year’s convention is ‘Promise of God: Conditions of Revival’ which will be addressed by renowned Muslim scholars and leaders from around the world.

Political, civic and indigenous leaders sent greetings to the convention and welcomed the participants to the city.

“Canadians across the country are making great strides in strengthening our communities,” said the Governor General of Canada, David Johnston, in his greetings.

“It is with this in mind that I would like to send greetings to the participants of the Reviving the Islamic Spirit (RIS) convention.”

Ontario Premier Kathleen Wynne congratulated RIS and the Muslim community for their contributions to the province.

“I commend you for the vital role you continue to play in fostering a culture of peace, tolerance, and mutual respect, and for your ongoing efforts to bring people together in celebration of our shared diversity,” Premier Wynne wrote in her message to the convention.

“It will be a timely discussion on many challenges faced by us collectively and, inshaAllah, find answers to,” said RIS in a release. “It will be a hopeful and positive response, one that will uplift our soul, inspire our heart and revive our spirit.”

Founded as a youth initiative over fifteen years ago, the convention strives to address issues pertinent to Western Muslims and inculcate a strong identity, which is centered on the peaceful practice of faith and making positive contributions to society.

The convention will include a special tribute on Saturday to the late boxing legend Muhammad Ali. His wife, Lonnie Ali and daughters, Rasheda and Maryum Ali will be special guests.