CAIRO – The mysterious ‘execution-style’ killings of Muslim young men in Indiana is casting its shadows on the American Muslim community, who urged the investigators to conduct a full and comprehensive investigation to bring justice to the families of the deceased.

“People think back to the Chapel Hill murders where the family and Muslim community firmly believes it is a bias motive,” Ibrahim Hooper, a spokesman for the Council on American-Islamic Relations, the Washington-based Muslim advocacy group, told The Washington Post.

“They look at this and see a similar kind of thing so that’s in everyone’s mind. It brings back those memories and concerns.”

Hooper said that CAIR has reached out to investigators in the case, to local Muslim community leaders and to the families of the victims.

He added that many in the Muslim community are comparing the killings to the three Muslims who were killed in Chapel Hill, N.C. a year ago. At that time, relatives of the victims insisted that the incident should be viewed as a hate crime.

The bodies of Mohamedtaha Omar, 23, Adam K. Mekki, 20, and Muhannad A. Tairab, 17, all of Fort Wayne, were found by police inside a home in the 800 block in East Lewis Street on Wednesday.

The coroner’s office said each died of gunshot wounds and ruled their deaths homicides.

Police authorities said that each was shot “multiple” times in an “execution-style” murder, ruling out that the boys were related to gangs.

Two of the young men, Omar and Tairab, were laid to rest on Saturday.

People from more than 30 states came to remember the two, some from as far as Utah, New York and Florida. Most in attendance were a part of the Sudanese and Chadian communities.

“They will always be remembered as good kids,” said Abdelaziz Hassab, a relative of Omar and Tairab.

“Always have been diligent to help their families and look for a better future.”

Both Omar’s parents, as well as Tairab’s father were at the day of remembrance. Tairab’s mother is in Sudan.

“We all came here to find peace and security,” Hassab, who escaped war in Sudan, said.

“We’re from the war zones, but the destiny waiting for us is real crazy.” 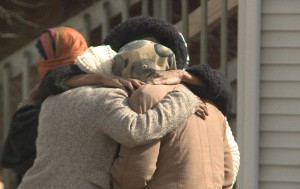 Muslims during the funeral of two of the murdered Muslim youth

“‘Execution Style’ and the word ‘Muslim’ have certainly been forever ingrained in the minds of American Muslims and they trigger painful images of 3 beautiful souls lost for simply being Muslim,” Ahmed Abdelmageed, director of experiential education at Manchester University’s college of pharmacy in Fort Wayne, wrote on Facebook, Huff Post reported.

“I caution however that the reason does not appear to be related to them being Muslim.”

MPower Change, a Muslim online activism group, has started a petition calling for the Fort Wayne Police Department to “conduct a full and comprehensive investigation” of the killings. The group is promoting awareness of the killings on social media with #OurThreeBoys.

Omar Suleiman, a Muslim scholar, instructor and head of History Dept. at Bayyinah Institute, shared his condolences on his official Facebook page.

“‪#‎OurThreeBoys So saddened to hear of the execution style deaths of these young men. No motive is known yet, but 3 lives are lost and families are grieving. The media is of course silent. May Allah make it easy for them and reunite them in paradise. Ameen,” he wrote.

Hamzah Sharif, the imam of the Islamic Center of Fort Wayne, did not mention a possible motive in a Facebook message about the young men’s funeral.

He lauded the presence of the town’s other communities of faith at the service.

“All of [the] Fort Wayne community showed unity and solidarity against violence and stood together to pray for the three young men along with their families,” Sharif wrote.