TORONTO – Canadians are expressing strong condemnation in the wake of a suspected terrorist attack in Edmonton, Alberta, that injured five and led to the arrest of a 30-year-old refugee from Somalia, Abdulahi Hasan Sharif.

“We cannot — and will not — let violent extremism take root in our communities. We know that Canada’s strength comes from our diversity, and we will not be cowed by those who seek to divide us or promote fear,” said Prime Minister Justin Trudeau.

“Our thoughts are with those injured, their family and friends, and all those affected by this senseless act of violence. I am also grateful for the first responders who were there on the scene, and the enforcement authorities who have been working through the night to make sure that everybody in Edmonton and Alberta is safe and secure. Police officers put themselves at great personal risk every single day on our behalf, and this attack is a stark reminder of the sacrifices they make for the public good,” added the Prime Minister.

An Edmonton police constable was stabbed by the suspect who later drove a truck that mowed down pedestrians.  Four people were injured, along with the policeman.

The man is now facing terrorism charges and five counts of attempted murder. A Daesh flag was found in the vehicle.

The RCMP’s Integrated National Security Enforcement Team had interviewed Abdulahi Hasan Sharif in 2015. But RCMP Assistant Commissioner Marlin Degrand said there had been insufficient evidence to charge him or issue a peace bond at the time and he was not considered a national security threat.

Alberta Premier Rachel Notley vowed to do all in her power to stop terrorism in its tracks.

“Freedom and liberty are core to who we are as Albertans, and that core can never be divided by those who know only fear, violence and hatred,” she told media Sunday morning. 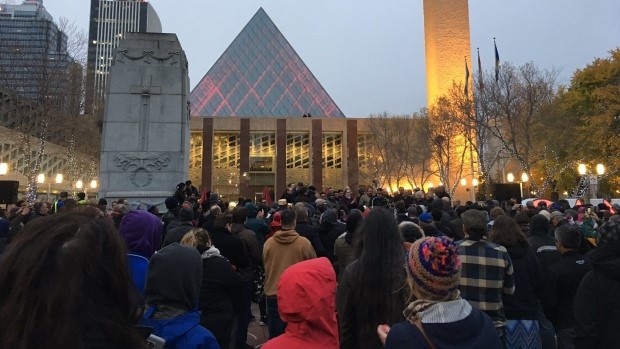 The National Council of Canadian Muslims (NCCM) condemned the brazen and senseless attacks.

“We denounce these cowardly acts of wanton violence in Edmonton.  There is never any justification for such criminal acts.  Our thoughts and prayers are with the victims and their families,” said NCCM Executive Director Ihsaan Gardee.

“Canadian Muslims stand united with all Canadians against all forms of hate and violence.  We urge local authorities to bring the perpetrator quickly to justice.  Such despicable acts must be punished to the fullest extent of the law,” added Gardee.

“Senseless attack in Edmonton. Prayers for all affected. We renew our commitment to fight violent extremism with all our Canadian partners,” tweeted the Canadian Council of Imams.

“We feel that it is important to respond in a unified voice and make it absolutely clear that this individual has no place in our community,” Ahmed Ali wrote in a media release Sunday.

“We are your neighbors, co-workers and police officers and we stand strongly beside you in condemning this violence and mourning its effect on the community.”

Edmonton Mayor Don Iveson is calling for vigilance and community solidarity after the chaotic night.

“It is vital now that we not succumb to hatred, that we not be intimidated by violence, and that we respond with love and strength,” Iveson said. “We will not be divided.”

Meanwhile, RCMP Assistant Commissioner Marlin Degrand stated in a news conference Sunday afternoon “this is an individual that is responsible for these crimes.” He insisted, “None of our citizens, Muslim or other, support this kind of activity.”

On Sunday evening, the Alberta Muslim Public Affairs Council (AMPAC) organized an event outside Edmonton City Hall to express solidarity with police and victims of the attack, and condemn terrorism.