WAYNE – The Muslim Student Association at Wayne State University, Detroit, has set up a ‘blessing box’ under the slogan “Take what you can, Leave what you can” outside the University’s Islamic Center of Detroit in Midtown, known as Cass Mosque.

“The things that go in the box for passersby are nonperishable food, clothing and hygiene items,” Lila Al-Shwaf, the idea’s initiator told Detroit Free Press on April 8.

Al-Shwaf is a 22-year-old graduate student of supply chain management, who raised the idea at the association in January 2017.

Looking into the logistics, the association contacted the Crystal Rock Cathedral, an Assemblies of God church in Ardmore, Oklahoma which also has a blessing box.

“The cathedral gave us advice, tips, tricks and things to think about,” Al-Shwaf informed.

“Although there is ‘The W’ food pantry on campus, our box fills a gap because it’s available 24/7, and since we established it outside campus you don’t have to be a student, or even have an ID, to pick up items,” the Muslim student explained.

“We wanted anybody in the community who is in need to be able to access it and anybody also who wanted to give to be able to reach it and provide something,” she continued.

Al-Shwaf graduated in May 2017 and is currently a master’s student in industrial engineering. However, she stays at the forefront of this students’ project and continues to dedicate her time to the association. 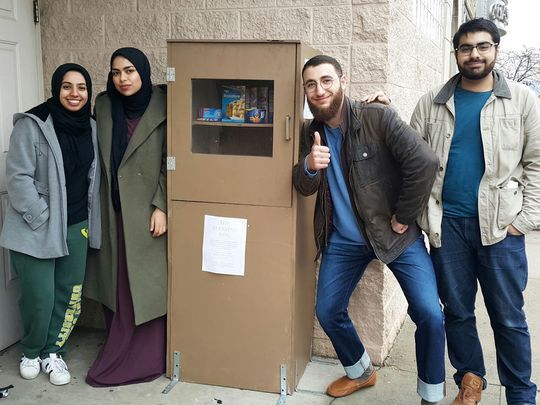 The builders of the box are Ramaiz Imran, a 20-year-old student of civil engineering, and Hassaan Ahmed, a 23-year-old nursing student.

“After talking to Crystal Rock Cathedral, a temporary plastic cabinet was put up in July 2017 to pilot the project, but it was stolen because it was light,” Imran clarified.

“Ultimately, the main reason we worked so hard on turning this project into a reality is because Islamic Shari’ah highly emphasizes helping the poor and being good to your neighbors,” Imran said.

Muhammed Suliman, a 21-year-old business student and a member of the association hope the project will create a bigger sense of belonging.

“I hope that it allows people … a vessel to express their concern for their wider community and it gives people who might’ve wanted to contribute and didn’t know how a way to do so and just basically create a bigger sense of belonging and community,” he said.

Suliman informed that giving back isn’t anything new for the association as they’ve also “organized a water drive for the Flint Water Crisis and collected enough water bottles to fill a large UHAUL truck.”

He explained that “community concerns are always on our top priority list. These are our people and we try to do different types of events and organize different kinds of drives to contribute.”