TORONTO – MuslimFest, the largest Muslim festival in North America, returns to Mississauga Celebration Square in suburban Toronto this weekend for its twelfth year and over 25,000 visitors are expected to take part in the festivities.

“The event exhibits a unique cultural fusion that combines Islamic traditions and Canadian lifestyle that no other festival displays, and this sets it apart and enjoyed by attendees from different backgrounds and age groups.”

This year’s MuslimFest will also feature Ink Pallet Production, a seminar with professional artists who will teach attendees how to draw Pokémon, Marvel and DC comic superheroes, including Muslim superheroes, Mrs. Marvel and Dust.

A Syrian-Canadian dance group, Sooriana will be performing traditional weddings zaffeh, sword shows and cultural songs with both traditional and modern music.

According to Sana Khawaja, “recently arrived Syrian refugee families will be hosted at the festival so that they can have a fun weekend before school starts and experience Canadian culture and diversity.”

“Celebrating Canadian Muslim culture is paramount because it is a way for individuals to forge their own understanding of themselves, a cross section between living a Western lifestyle and practicing the Islamic faith,” said Khawaja.

“It is this combination that allows Harris J, a teenager from Briton with a half Indian half Irish background to sing pop music with his faith or how Preacher Moss – a Black- Muslim American sharing his experiences of race and culture in stand-up comedy.” 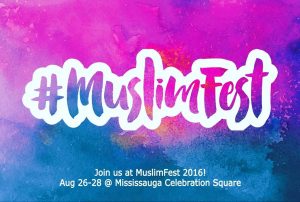 The two-day festival has drawn praise from politicians and civic leaders across the region for showcasing the province’s diversity and promoting understanding among citizens.

Launched in 2004, MuslimFest is a joint initiative of DawaNet, Young Muslims Canada, and Sound Vision.

It aims to connect with the broader community through the language of art, humor, and meaningful entertainment.

It has since been expanded and moved to the city’s public outdoor square, Celebration Square, where it attracts more than 25,000 visitors each year.

The festival was chosen by Festival and Events Ontario (FEO) as one of the top 100 festivals in the province in 2013.