WASHINGTON – Though facing rising intolerance and Islamophobia, some hijab-wearing American Muslim women succeeded in making 2016 a kinder, more just and beautiful year, thus presenting a shinning model for others.

Here follows a short list of some of these women who, among others, made 2016 a very exceptional year, thus making the country great. 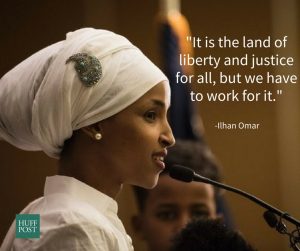 Ilhan Omar became the nation’s first Somali-American lawmaker after being elected last November to a state legislature with a victory in Minnesota.

The 33-year-old Omar was born in Somalia before she fled to the US to escape civil war.

Though she is a Muslim, she ran a campaign grounded in progressive agendas predicated on standing up for all Americans, regardless of faith or lack thereof.

“It is the land of liberty and justice for all, but we have to work for it,” Omar told The Huffington Post in October.

“Our democracy is great, but it’s fragile. It’s come through a lot of progress, and we need to continue that progress to make it actually ‘justice for all.’” 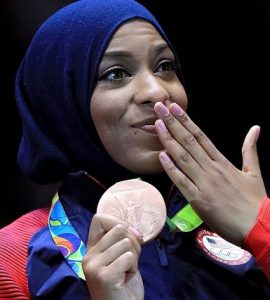 Ibtihaj Muhammad won her first Olympic medal at the 2016 Summer Olympics in Rio de Janeiro, Brazil, on Saturday, August 13, making history as the first American Muslim to compete in hijab in Olympic Games.

“It’s a tough political environment we’re in right now. Muslims are under the microscope,” Muhammad said during the US Olympic Committee summit in Los Angeles.

“It’s all really a big dream — I don’t think it’s hit me yet. The honor of representing Muslim and black women is one I don’t take lightly.” 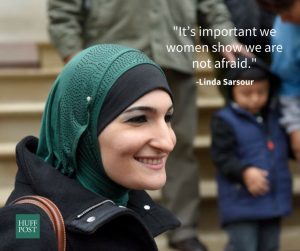 Prominent Muslim activist Linda Sarsour was invited to be one of three women co-chairing the Women’s March On Washington, scheduled to take place in Washington DC on January 21, 2017. The event will fall a day after President-elect Donald Trump is sworn into office and aims to send the message that activists “will not rest until women have parity and equity at all levels of leadership in society.”

“Donald Trump’s administration is a nightmare being manifested into an administration,” Sarsour told The Huffington Post. “It’s important we women show we are not afraid.” 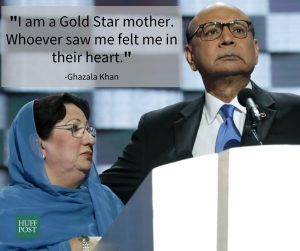 Ghazala Khan, and her husband, Khizr Khan, lost their son Humayun, a captain in the US Army, in 2002 in Iraq.

The couple made an appearance at the Democratic National Convention this summer, the occasion which the father used to blast the then Republican presidential nominee Donald Trump for his call to ban Muslims from entering the United States.

“Without saying a thing, all the world, all America, felt my pain,” Khan wrote. “I am a Gold Star mother. Whoever saw me felt me in their heart.”

The incident inspired hundreds of other Muslim American women to fire back at Trump on social media with the hashtag #CanYouHearUsNow. Their voices rang loud and clear. 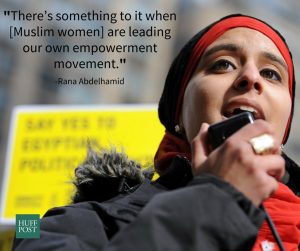 The multi-talented Rana Abdelhamid, founder of the Women’s Initiative for Self-Empowerment, has dedicated her life to helping Muslim women find strength within themselves to combat Islamophobia.

She created inspiring photography series “Hijabis of New York,” a Humans Of New York-spinoff, as well as teaching self-defense workshops for Muslim women, who are overwhelmingly targeted in acts of Islamophobic violence.

“There’s something to it when [Muslim women] are leading our own empowerment movement,” Abdelhamid told The Huffington Post in January. 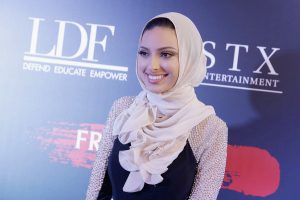 “I believe in rebellion as a form of honestly,” she said during a Tedx Talk in 2015. “To be our most authentic self is to rebellious.” 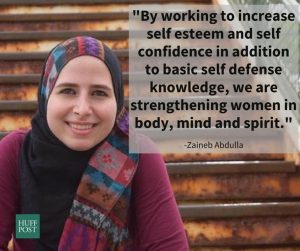 Chicago-based self-defense instructor Zaineb Abdulla responded to the fear that has gripped many in the Muslim community since after the US presidential election by launching a “Hate Crime Survival Seminar” in November. 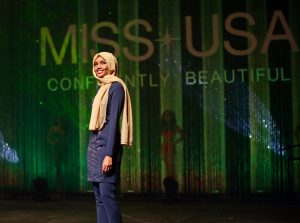 American Muslim teen Halima Aden made history on Sunday, November 27, by competing at Miss Minnesota competition in her traditional dress and modest swimwear, reaching the semi-finals of the beauty pageant.